The reputation for rampant racism at Fox News has been well established over many years. Their top program hosts routinely disseminate the positions of notorious hate groups (see Fox’s Senior White Nationalist, Tucker Carlson), who reciprocate by expressing their admiration and support for those hosts. 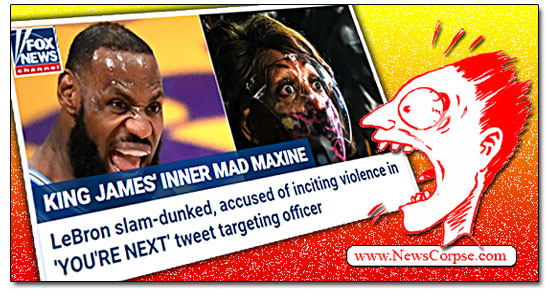 On Thursday morning Fox News provided additional evidence of their embrace of overt bigotry. On an article posted on their website, Fox attacked NBA all-star Lebron James for a tweet that they said was “inciting violence” against the Ohio police officer who shot and killed a 16 year old girl. The now-deleted tweet was posted shortly after a jury convicted Derek Chauvin, the Minnesota officer who murdered George Floyd (which Fox News twisted to accuse Democrats of advocating riots) The tweet said simply “Accountability. You’re next.”

Clearly James was referencing legal accountability for what appeared at the time to be another police shooting of a Black “suspect” when other less deadly options were available. The question as to whether or not this was an unjustified overreaction by this officer has been raised since video of the event was released. And James deleted his tweet to lower the heat generated by this controversial subject.

However, the question of Fox’s racism is unarguable. The photo (above) that accompanied the article was blatantly contrived to induce fear and to prejudice the viewer against “mad” Black persons in public life. Next to James, Fox News placed Democratic Rep. Maxine Waters, a favorite target of Fox. Waters was similarly accused of inciting violence when she advocated that protesters be “confrontational,” which is actually what protests are about.

Neither James nor Waters ever incited violence (unlike Donald Trump and his Fox News shills). But both James and Waters were depicted by Fox News as ominous villains in order to frighten Fox’s audience that is already riddled with racial anxieties and prejudice. Fox News ran numerous segments on these subjects that they repeatedly – and falsely – described as “putting a target” on the backs of police. Which is an awkward turn of phrase considering the literal targets that police put on the backs of Black Americans.

Now Fox News is doing the same thing. Fox’s deliberate distortion of the comments by James and Waters, along with the photo intended to invoke fear, are proof positive of the right-wing network’s intent to spread racist memes to their millions of viewers. It is a despicable abuse of not-very-subliminal messaging to elicit hate. And it’s what Fox News has been doing since its inception.