For the past week a murder trial in Florida has fixated the nation and the media. This sort of thing is not unusual as the past trials of Jodie Arias, Scott Peterson, Casey Anthony, and all the way back to O.J. Simpson have proved. What is unusual is the lengths to which Fox News has gone to cheerlead for the defendant.

From the very beginning Fox has sought to portray George Zimmerman as the victim who was only acting in his own defense. At the same time, they cast Trayvon Martin as a violent thug who must have been up to no good. Take a look at the graphic editorializing Fox engaged in early on:

In reporting on the court proceedings this week, Fox continued to demonstrate their overt prejudice in favor of Zimmerman. Nearly every commentator Fox put on the air found fault with the prosecution and managed to spin the witness testimony as beneficial to the defense. And the headlines at the Fox Nation Lie Factory tell the story that Fox is desperately trying to implant in the weak minds of their viewers:

This parade of pro-Zimmerman analysis is reminiscent of last year’s election analysis on Fox, where every discussion leaned heavily in favor of a Romney victory. Fox irresponsibly led their audience to believe that President Obama was irredeemably unpopular and bound for defeat. Fox would only present disreputable polls that showed Romney ahead, while ignoring all the other surveys (including their own) that forecast an Obama victory. When reality set in on election day, Team Fox and the gullible dupes who watch the network, were dumbfounded at a result for which they were entirely unprepared.

The same thing is happening now with this trial. The obvious zeal that Fox is expressing for a Zimmerman acquittal is not incidental. It fits into their mission to demonize minorities. Try to imagine what Fox’s (or the rest of the media) reaction to this case would have been if the races were reversed. Do you think Fox would be defending a black man who had shot and killed an unarmed white kid walking home with Skittles and iced tea? 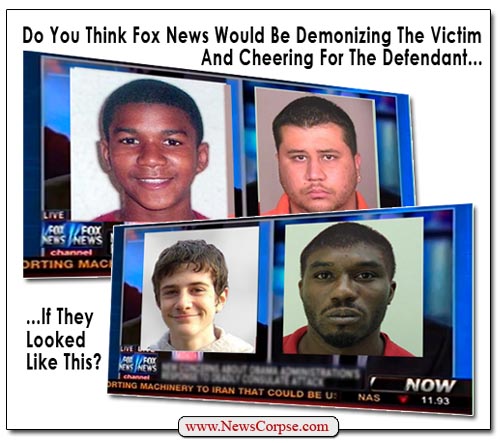 The consequences of Fox’s disinformation could be troublesome. If Zimmerman is convicted, the response by the racially biased viewers of Fox will be shock and awe. Just like after the election, they will be unable to grasp how a jury had concluded that Zimmerman was guilty when everything they had seen on Fox News convinced them that he was innocent and that there was no chance of a conviction. Fox appears to be priming their viewers to rise up in outrage at a verdict they never saw as even a remote possibility.

On CNN and MSNBC there has been a much more balanced presentation of the court proceedings. When the prosecution flubbed an argument, it was reported as such, even on Al Sharpton’s show, despite the clear bias of the host. When a witness contradicted a defense assertion, that was reported as well. The reason for this is that unbiased journalists do not have a stake in the outcome. Liberals, from the outset, have only wanted justice to be done. They were appropriately disturbed at the start of this affair when Zimmerman was let off without an arrest or investigation. The protests that erupted were focused on those ends, not on railroading Zimmerman into jail.

Now that the people are getting their trial, the judgment of the jury ought to be respected. But That is not the tone that Fox is advancing. The hunger for absolution on Fox is palpable. They are convinced that a black youth with no record of violence or criminal activity initiated an unprovoked attack on a conscientious neighborhood watch captain. And until the jury rules, that is the position Fox is sticking with. If that isn’t racism, then what the hell is it?

107 thoughts on “Why Is The Fox Nation Rooting For George Zimmerman?”