The Associated Press is reporting today that a shortfall in the availability of the sedative pentobarbital will put a crimp in the calendar of the Texas Department of Criminal Justice and it’s scheduling of executions. 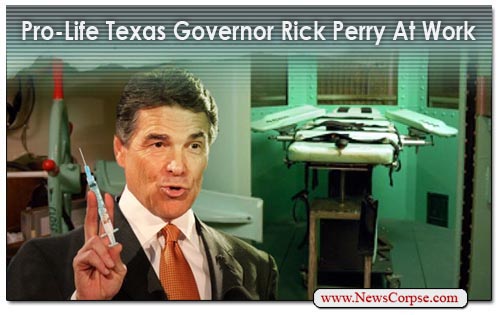 The state of Texas has led the nation in executions by a wide margin since the Supreme Court allowed executions to resume in 1976. Since then Texas has executed 503 inmates. The next highest number was in Virginia with a mere 110.

The availability of the pentobarbital is rapidly depleting due to the death cult fetishism of the Texan government that makes it hard for supply to keep up with demand. The problem is exacerbated by the reluctance of pharmaceutical manufacturers to provide their products for use in ceremonial rituals of cold-blooded murder. And since Texas no longer has an electric chair or a gas chamber, their alternatives are sharply narrowed.

Consequently, Texas governor Rick Perry is in talks with a number of prominent Somali war lords who have the resources to fulfill the state’s ever growing need to produce fresh corpses. The negotiations involve setting up procedures to transport inmates to the African nation where the authorities will disburse them to various factions of the Taliban or Al Qaeda for termination. In exchange, the Somalis get critical practice assassinating Americans, which they can put to use in future terrorist campaigns. It’s a win-win scenario for two parties who have the same objectives: killing large numbers of American citizens.

Other alternatives under consideration include stoning inmates in the prison yard; forcing them to consume large amounts pork rinds and bacon-cheeseburgers; fitting them with Obama masks and releasing them outside of Waco; inviting them to go quail hunting with Dick Cheney; and for black inmates, good old-fashioned lynchings (they’ll never have to worry about running out of rope).

Whatever course of action they settle on, you can rest assured that Texas will not allow their leadership in this field of endeavor to lapse. Texas is bound and determined to remain the execution champs for years to come. Even if it means resorting to overdoses of Viagra, which the menfolk of Texas still have in abundant quantities.

10 thoughts on “Due To Drug Shortage, Texas To Start Outsourcing Executions To Somalia”