Last week a major story broke about Sean Hannity interviewing three couples who claimed to have been harmed by the Affordable Care Act (aka ObamaCare). However, an aide to the former governor of Montana contacted these alleged victims and published his account on Salon.com. What he discovered was that not a single one of them had even bothered to look at the insurance exchange to ascertain whether or not they would be helped or harmed. The entire episode of Hannity’s program was a lie.

So this week the Fox News MediaBuzz program, hosted by Howard Kurtz, spent less than a minute on Hannity’s blatantly dishonest broadcast, but took an interesting perspective. Kurtz trivialized the deliberately false segment by asking whether “Fox News is providing balance to the rest of the mainstream media.” Of course. Bringing in six allegedly neutral Americans to lie through their teeth about a health insurance program they didn’t even bother to explore is merely an attempt to “balance” the news coverage of the plan. At least according to the ethics (or lack thereof) of Fox News. 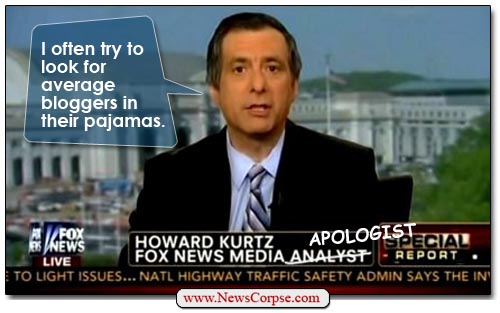 Kurtz introduced his segment by noting the falsehoods proffered by Hannity and his lying guests. But he ended the same introduction by asking “Could it be said that various news outlets were pushing their own agenda?” This implication that overt dishonesty is equivalent to simply advocating for an agenda reveals the crass interpretation that Kurtz and Fox have of journalistic ethics. And his insertion of blame attributed to unnamed “various news outlets” is just his way of pretending that everybody does it. Forty-five seconds later the segment was over without anyone mentioning Hannity’s name again.

For contrast, CNN’s Reliable Sources covered the same story. They spent four and half minutes on it, complete with clips from Hannity’s show and an interview of the Salon author, Eric Stern. Of course, CNN has a competitive motivation to more thoroughly examine an embarrassing episode for Fox, but the differences between these reports are still significant. CNN did what journalists do. Fox swept their dirt under the carpet.

When Howard Kurtz announced that he was leaving CNN to become a media analyst at Fox News, he said that “Fox wouldn’t have hired me if it wasn’t interested in my independent brand of media criticism.” However, Fox never hires anyone for their independence or accuracy. In fact, the further you stray from reality, the better your employment opportunities at Fox. And this segment that leaves Hannity unscathed and quickly shifts to another subject (how the media unfairly beat up on Republicans after their humiliating defeat over the government shutdown), is evidence that Kurtz has no intention of being independent.