Last week when Fox News contributor, Dr. Ben Carson, told the ultra-conservative crowd at the Values Voter Summit that the Affordable Care Act (aka ObamaCare) is “the worst thing since slavery,” he was subjected to well deserved criticism from the ranks of decent Americans who were repulsed by his nauseating remarks. Unfortunately, this egomaniacal demagogue learned nothing from his critics and decided to go on Roland Martin’s radio show to defend himself. Not surprisingly, he made things much worse. 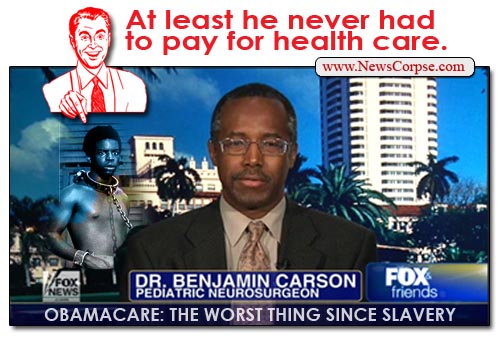 When asked by Martin whether ObamaCare was really worse than things like the Jim Crow laws, Carson responded “Yes, absolutely.” Then he went into a nearly incoherent rant that barely touched on the comparison between ObamaCare and slavery.

Carson: I’ll tell you why I think that. This nation was founded on the principle that it would be a new type of nation that was for, of, and by the people. A constitution was put in place that would assure that the people remained at the pinnacle of power and that the central government would never reach the point where it had control of the people. This fundamentally changes the relationship.

It is rather appalling that Carson’s defense would include a reference to the Constitution’s original language that permitted slavery. In this context his argument, that appears to be focused on the primacy of the people in a democratic republic, makes no sense whatsoever. Most Americans do not concur with the founding principle that allows ownership of human beings, but Carson is celebrating it. Furthermore, he never clarifies why ObamaCare changes the relationship between the government and the people. But he does attempt to invent some sort of intervention by the government into medical care.

The middleman to whom Carson is referring is not the government, it is the insurance company. And that’s the way things have been for decades prior to ObamaCare. However, in the past the insurance companies had even more control over the patient’s welfare financially and medically. They could deny coverage at will and put so many exceptions into their contracts that even conditions for which patients thought they were covered, they were held responsible and often driven into bankruptcy. If the situation was turned upside-down, it is with respect to the insurance company losing that sort of incontestable dominance.

Carson continues blathering nonsensically about insurance companies, who will now have more people buying in than ever before, will go out of business. Apparently he thinks that booming consumption is harmful to their bottom line. He then concludes that this failure will lead to a single-payer system. If only. That would be a great outcome, but nothing in his logic predicts it. Then he drops the most absurd part of an already epically absurd analysis.

Carson: And that will give the government the kind of control that it needs. And, you know, all you have to do is look back through history – and this is something that most people don’t, they don’t know very much about history, even in this country.

Huh? It will give the government the kind of control that it needs? To do what? Harvest organs for billionaires? Build replicants to work in extraterrestrial mining camps? Withhold dialysis from people who vote for Republicans? Carson doesn’t say. Neither does he say what historical lessons are being ignored with regard to health insurance reform.

The one thing that Carson has said affirmatively was that ObamaCare is the worst thing since slavery. His defense of that statement is unintelligible. But the falsity of it is obvious to anyone with a functioning cerebellum. Does he really think that making health care available to millions of Americans who never had it before is worse than anything since slavery? Is it worse than the civil war? The Great Depression? The incarceration of Japanese-American citizens during World War II? Forced segregation in the South? The Vietnam War? The terrorist attacks on September 11, 2001?

If this is the depth of Dr. Carson’s intellect, it is hard to see how he got through medical school, much less became a renowned neurosurgeon. Perhaps his blind fealty to right-wing polemics and Christianist dogma have clouded his thinking. It’s understandable that Fox News viewers would buy into this shallow foolishness if it were coming from a flake like Sarah Palin. But Carson is a real doctor with respectable credentials and, in that sense, it makes it even more pathetic.