No matter how prepared one is for outrageous stupidity and mind-numbing paranoid delusions, Fox News still manages to come up with surprises. Today the Fox Nationalists have sprung another winning lunatic exclusive on its assembly of gullible readers. The article asked the question that every batshit crazy American is hungering to know: “Did Woman Fake Fainting During Obama’s Speech?” 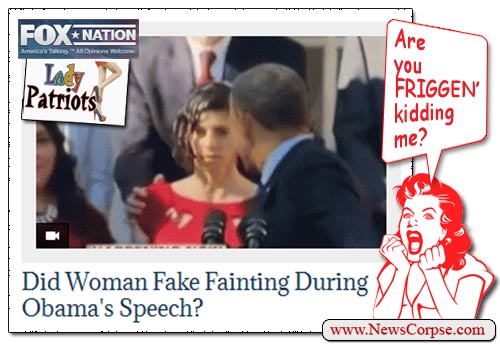 The item linked to the blog of the “Lady Patriots” whose intrepid detective work uncovered this dastardly conspiracy to concoct a phony medical crisis in the middle of President Obama’s speech on the Affordable Care Act. Author: “Dr.” Sharon Schuetz discloses that she “couldn’t believe how phony it was. […] It is obvious that there are quite a few people involved in this latest fraud put out by the Whitehouse.” After admitting that she doesn’t watch a lot of television, Schuetz said in the video she narrated that she recognized the conspirators discussing the plot and their efforts to carry it out. Thank goodness we have people like Schuetz around to unravel these plots that, to everyone else, just look like some folks on a podium helping a pregnant woman in some distress.

Also today on Fox Nation, they explore the burning question as to whether ObamaCare killed the “Dollar Menu.” We could only hope. Think how many lives it would save. 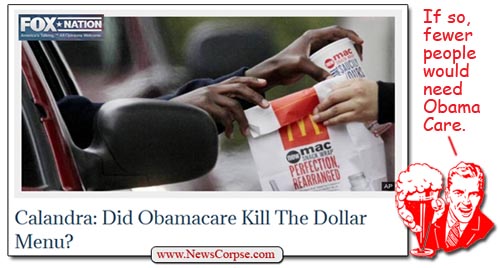 And finally, the brain trust at Fox sought to learn what would happen if Sean Hannity called the ObamaCare hotline. What happened was that a pleasant agent answered almost immediately and was kinder to him than his obnoxious behavior deserved.

[Update: 10/24/2013 6:42pm] It turns out that Hannity got the agent fired. On his radio program today he spoke to her and tried to make amends by offering her money and saying he would try to help her get another job. Of course, none of that would be necessary if he hadn’t lured her into a conversation that violated her terms of employment. 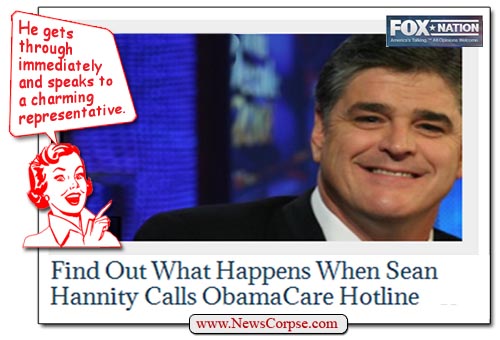 9 thoughts on “Fox Nation Asks: Did Woman Fake Fainting During Obama’s Speech? And Other Idiocies.”