Bloggers on Free Republic, AKA Freepers, are mad as Hell and they aren’t going to take it any more. The treatment of Sarah Palin by Fox reporter Carl Cameron and others has incensed them to the point where they are vowing never to watch again. I’ve compiled some of the comments from the site for their comedic value: 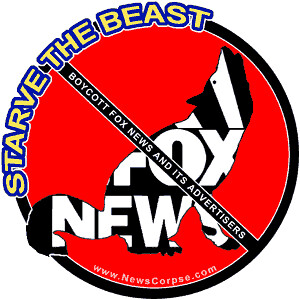 And finally, there was this insightful thought from a a true afficianado of the arts:

This thread would do really well at Daily Koz. They think this is a great idea. They even have the artwork ready…

Yes, that’s my artwork posted by a Freeper. Thanks veritas2002. And thanks for joining the boycott everybody.

Update: The folks at RedState are weighing in as well with Operation Leper:

We’re tracking down all the people from the McCain campaign now whispering smears against Governor Palin to Carl Cameron and others […] We intend to constantly remind the base about these people, monitor who they are working for, and, when 2012 rolls around, see which candidates hire them. Naturally then, you’ll see us go to war against those candidates.

5 thoughts on “A Boycott Of Fox News By Conservatives”