Fox News is heavily invested in derailing the Affordable Care Act (aka ObamaCare). They have devoted hundreds of hours of airtime and editorial disinformation aimed at creating a climate of fear in order prevent Americans from learning about and exercising their rights under the new law. The rabid right is so desperate to crush access to affordable, effective health care that they have launched a “Fright Offensive” of unbelievable proportions. The latest example of this is an article on the Fox Nation website with the histrionic title “A Ton of ObamaCare Navigators Are Criminals.” 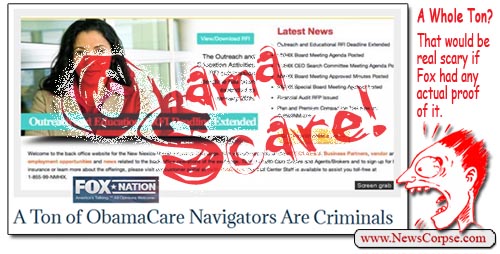 For over 50 more documented examples of blatant lies by Fox News,
get the acclaimed ebook Fox Nation vs. Reality. Available at Amazon.

No kidding? So the ghastly prospect of engaging with ObamaCare will now force you to fraternize with criminals – a ton of them. And the evidence of this shocking state of affairs? Well, it’s a little thin to say the least.

The Fox Nationalists linked their posting to an article on the ultra-conservative National Review Online (NRO). The author is Jillian Kay Melchior, a Thomas L. Rhodes Fellow for the Franklin Center for Government and Public Integrity. The Franklin Center is a Koch brothers-funded enterprise that disseminates right-wing propaganda to the media. In her slanderous article Melchior lays the groundwork for a wholly unsupported proposition that the people recruited to assist citizens with ObamaCare enrollments are a “fishy” and unsavory collection of outlaws. She says that…

“One in seven of New Mexico’s certified Obamacare navigators had a match in the Federal Bureau of Investigation’s National Crime Information Center (NCIC) database, according to public records obtained by National Review Online.”

Well, there you have it. ObamaCare is a thinly-veiled assembly of hustlers just waiting to exploit innocent health insurance consumers. This would be even scarier were it not for the paragraph just below that reveals that…

“A hit in the NCIC does not necessarily reflect a criminal conviction. The database can include, for example, arrest records and criminal cases that were dismissed or led to an acquittal, according to the FBI.”

That fact, however, doesn’t deter Melchior from continuing her fear mongering with an ominous warning that ObamaCare Navigators have access to personal information “including Social Security numbers, financial data, and health records.” Of course, this is also true about the employees at every insurance company. In fact, sensitive personal data is accessible to tens of thousands of workers in banks, retail stores, phone companies, etc. But NRO didn’t bother to look into their NCIC records. Neither did they look into the criminal past of members of congress like Rep. Darrell Issa (the most virulent inquisitor of the Obama administration over phony and manufactured scandals), who has a long criminal rap sheet himself. And if Melchior bothered to investigate the nefarious wrongdoers of Fox News she might have found this:

All this proves is that, in any large organization that employs human beings, there will be some percentage who do not meet the standards to which the organization aspires. Their only responsibility is to conduct reasonable inquiries into the suitability of each applicant and perform due diligence to protect those they serve. The ObamaCare programs do just that, as stated in the article by a representative of the New Mexico Office of the Superintendent of Insurance (OSI).

“The OSI receives navigator applications from New Mexico’s health exchange, running them through the NCIC system by name, date of birth, and Social Security number. Applicants who have committed a significant financial crime or were listed on the sex-offender registry are automatically disqualified.

“For other navigator applicants who trigger NCIC hits, three OSI experts then review the results, assessing on a case-by-case basis whether a navigator should receive certification. For example, a 20-year-old shoplifting conviction for an otherwise upstanding citizen might not be disqualifying, while a recent fraud charge could be.”

So the ObamaCare administrators are doing exactly what is necessary to insure the security and safety of private data. Nevertheless, without any evidence of criminal wrongdoing by even a single ObamaCare Navigator, in the past or while performing their current duties, Fox News has made a blanket, declarative statement that “A ton” of them are “criminals.” It’s a brazenly dishonest smear that unfairly impugns good people who have chosen to help others acquire access to life-saving medical care. And it simultaneously seeks to sow suspicion of people and programs that were created to improve the lives and health of every American.

This is typical of how Fox News works tirelessly to spread fear that is based solely on conjecture and innuendo. They invent scandals from sentence fragments and foment outrage from deliberately falsified reporting. It’s a practice that does a disservice to anyone foolish enough to watch the network, but it does an effective job of keeping them squarely in the camp of fools – frightened, anxiety-ridden fools.

One thought on “Fox Nation vs. Reality: Smearing The ObamaCare Navigators”