The Tea-publican brain trust is at it again. It’s not enough that they campaigned feverishly to prevent the Affordable Care Act (ObamaCare) from becoming law; followed by an eye-popping 40 useless, symbolic votes in the House of Representatives to repeal the law; followed by Republican-led states refusing to participate in the health exchanges, transferring responsibility to the federal government they claim to hate; followed by efforts to intimidate schools, libraries, and sports teams from helping to educate Americans about a program that is available to them that can save money and even lives. And of course, Fox News is at the forefront of this festival of disinformation. 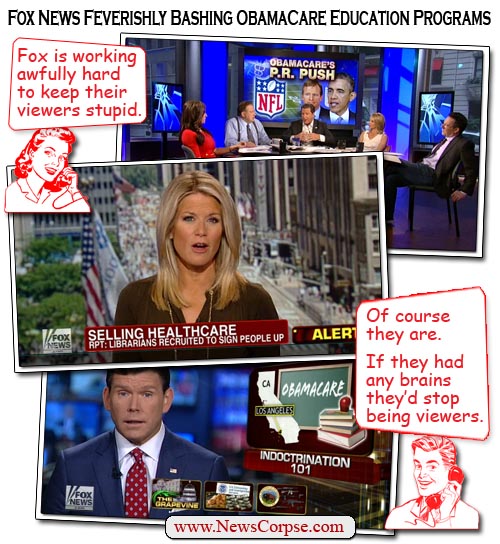 Nope. None of that was enough. So now they are embarking on a coordinated campaign to convince people that they should not sign up for ObamaCare when it becomes available. That’s right…If you are a young person with no health care, a family with over-priced private insurance, a patient with a preexisting condition, a senior on a fixed income, the GOP thinks you should forgo the benefits to which you are entitled and risk having expensive medical costs keep you from getting necessary care, or drive you into bankruptcy. Nice of them isn’t it.

The centerpiece of their campaign is a program to get people to burn their ObamaCare cards. There’s just one problem with that – as Stephen Colbert reveals, there is no such thing as ObamaCare cards. But never fear, the folks at the Koch-funded Tea Party asylum, FreedomWorks, are planning to make their own cards which will be suitable for burning. Watch Colbert spell out out the whole process works: