With a weekend full of legitimate news stories like the Olympics or immigration reform, Fox Nation reserved the top spot on their web page to post a blatant lie: “NAACP Requires Marchers Protesting Voter ID Law To Show Photo ID.” 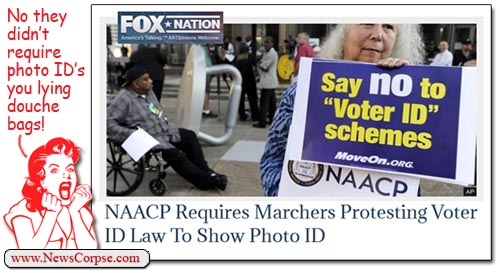 One of the favorite tactics of propagandists is to expose alleged hypocrisy on the part of their foes. And when they can’t find any actual hypocrisy, the more unscrupulous among them will simply invent some. That’s the case with this article on Fox Nation. Sourcing the information from the Daily Caller, a right-wing webloid run by Fox News anchor Tucker Carlson, the article states flatly that…

“North Carolinians marching to protest voter-ID laws must present a valid photo ID to participate in an NAACP-hosted protest against voter-ID laws in Raleigh on Saturday.”

The evidence of what would be an embarrassing misstep is a tweet by a conservative blogger that showed a portion of a flyer promoting the protest. The flyer had a list of “do’s and don’t’s” for the marchers. One of the “do’s” said to “bring a photo identification (driver’s license, passport or other valid photo ID) with you and keep it on your person at all times.” So there you have it. Except that what you have is something completely different than what the headline and story alleged.

There was absolutely no requirement by the NAACP, or anyone else, that a photo ID be shown in order to participate in the march. No one would be checking for them, and no one would be refused without one. The Fox Nationalists apparently can’t tell the difference between a requirement and a suggestion. The advice to carry a valid ID is one that is commonly given to people who participate in public protests. Occasionally such events encounter police interventions, and having your ID handy can smooth the process. That is the only reason that the flyer recommended that participants carry an ID. It was in no way a prerequisite for participating.

Even if there were a requirement to have an ID for the protest, there still wouldn’t have been any hypocrisy. Conservatives like to make irrelevant analogies when defending their voter suppression plans. They point to the need to show an ID when boarding a plane or buying alcohol. However, flying and drinking are not in the same category as voting, which is regarded as right and a duty in our democracy. Any attempt to depress turnout, particularly in a way that is so transparently prejudicial, is undemocratic.

What’s more, the incidence of fraudulent voting is practically nil, so they are proposing to disenfranchise thousands of citizens in order to solve a problem that doesn’t exist. But that’s how they operate. And they don’t care any more about fair elections than they do about honestly representing the facts in a story like this one.

FYI: The “Moral Mondays” protest march, that Fox was so brazenly lying about, drew upwards of 80,000 people – in North Carolina!It was the largest civil rights march in the South since 1965.