The ultra right-wing WorldNetDaily website published an article today with the promising title, Good Riddance To The Dying ‘Mainstream’ Media.” Indeed, much of the corporate dominated press that controls about 90% of what is disseminated through television, radio, print, and the Internet, is hopelessly biased and/or lacking in substance. Polls show that respect for the media is at historically low levels, and many outlets are losing audience in droves. 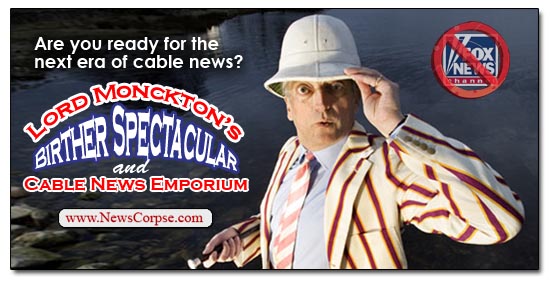 However, WND has an entirely different take on what is troubling the media. Lord Christopher Monckton (that’s right, “Lord”), the author of the article, is convinced that it is the left that is responsible for the decline of the Fourth Estate. He asserts that…

“The first duty of your average Marxist journalist (and that means most of them) is to report the news in a way that furthers the global spread of a single narrow, outdated political prejudice.”

As the primary example of that prejudice, Monckton asks us to “Consider the question of the Obama ‘birth certificate,'” which he insists is inauthentic. That’s because Monckton is an unabashed Birther who has been steadfastly committed to exposing President Obama as a fraud from Kenya, no matter how many times that stubborn and implausible myth has been debunked. And he blames the media for failing to inform the people, saying that they “have never subjected the ‘birth certificate’ to scrutiny.”

But Monckton’s bent toward conspiracy theorism does not end with Birther delusions. He is also a fervent denier of climate change, which he regards as a hoax. And just as with the Birther contrivance, the media is wholeheartedly behind the deception that the planet is warming, complete with the concurrence of 97% of the world’s scientists who have studied the phenomenon. Monckton accuses the media of “refusing to print any comments or letters to the editor on climate change, if those letters in any way call into question the official version of the science.”

As a result of his dissatisfaction with what he regards as the Marxist media, Monckton has a proposal to address the imbalance and biases of the press. He begins by declaring the conservative wing of journalism to be too cowardly to stand up to their leftist oppressors. And this is where it gets really fun:

“Why, for instance, has Fox News not dared to tackle the birth-certificate question in any depth. The reason is that, though it is generally fair and balanced, it is no longer unafraid. The intolerance of the left knows no bounds. They did not like Glenn Beck’s exposure of the ACORN scandal, so they hounded him and bullied his advertisers till he was forced out.

“Everyone else at Fox is now running scared. The standard Saul Alinsky tactic of viciously and persistently attacking the reputations of any who dare to oppose the left works all too well.

Exactly! Notice that Fox News never ever criticizes the President or Democrats over health care, or Benghazi, or the IRS, or Benghazi, or Ukraine, or Benghazi, or voter fraud, or Benghazi, or welfare, or taxes, or oil pipelines, or gun control. And did I mention Benghazi? As for the birth certificate, Fox never mentions that either, except when they do, repeatedly. So what is Monckton’s solution?

“The tea-party movement would justify its existence if it were now to establish a 24-hour TV news channel sufficiently independent of its advertisers and staffed by sufficiently tough-minded journalists that the bully-boys and Obots would be unable to frighten as they have frightened Fox.”

Just think of it. Twenty fours a day of Sheriff Arpaio and Donald Trump frothing at the mouth with condemnations of the Kenyan usurper in the formerly “White” House. They could bring Glenn Beck back to the airwaves with his unique brand of politi-vangelism and allusions to Nazis lurking in every shadow. Sarah Palin could host a conservative cooking show where she would feature her “word salad” inanities. Ted Nugent could take viewers on hunting safaris where the prey are wild liberals, which he has actually proposed.

Monckton’s network would be one that combined the best of televised snake oil ministries and a paranoia-infected, politically-deranged Game of Thrones. How could it miss? Well, they might want to check with the three other far-right networks that have tried to become the alternatives to the ultra-liberal Fox News: NewsmaxTV, Kelsey Grammer’s RightNetwork, and One America News Network, courtesy of the “Moonie” Washington Times. Well, they could check with them if they could find them.