Let’s get this straight. Fox News has been obsessively fixated on turning the tragedy in Benghazi into a scandal for nearly two years. They admitted a year ago that their CEO Roger Ailes personally pushed the story in violation of journalistic ethics. They hyped the multiple committee investigations led by House Republicans and lobbied for the House to form a Select Committee to further beat the dead horse that has thus far produced no evidence of wrongdoing on the part of the Obama administration.

After GOP Speaker John Boehner acquiesced to Fox’s demand for a Select Committee on the Politicization of Benghazi, Democrats contemplated whether they should participate in an obviously partisan political circus. Fox bitterly complained about the Democrats unwillingness to immediately validate the GOP charade. Eventually, Democratic Leader Nancy Pelosi reluctantly decided to assign members to the committee, which Fox News reported in their typically dishonest fashion.

And now, after all of that brazenly biased advocacy on behalf of the far-right Republican agenda to force additional and unnecessary inquisitions into Benghazi, representatives of Fox News are spewing offensive insults at the Democrats who have agreed to serve on the committee that Fox insisted that they serve on. 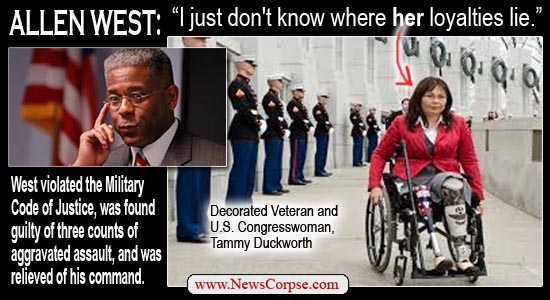 Fox News contributor and Tea Party darling Allen West was a guest on the right-wing Janet Mefferd Radio Show where he criticized Democratic members of the committee before the committee has even convened. He called Rep. Adam Smith a “geeky little debater” and said that Rep. Linda Sanchez has a “very whiny way.” But he saved his most potent and repulsive commentary for Rep. Tammy Duckworth, a decorated Iraq war veteran and multiple amputee as a result of wounds she received in battle. West explicitly demeaned Duckworth’s patriotism saying that “I just don’t know where her loyalties lie.”

That would be an insensitive and nauseating remark about an American war hero from anyone, but coming from Allen West it is particularly disgusting. In 2003 Allen West was in Iraq where he tortured an innocent Iraqi police officer. For that abusive and illegal behavior West was charged with violating the Military Code of Justice, found guilty of three counts of aggravated assault, and relieved of his command. The final Army report confirmed that he had committed illegal acts and merited court-martial. He only escaped a court-martial due to the intervention of a couple of GOP torture supporters in congress. He was allowed to “resign” from the service but not without paying a fine and having his criminal conduct documented in his record.

Allen West has no moral foundation from which to criticize a brave and dedicated American like Tammy Duckworth. West should be ostracized by every military and veterans organization for his vile remarks. Yet that’s only a small part of West’s relentlessly despicable character. He regards anyone who disagrees with him to be a communist and/or a Nazi. Here are a few more comments that reveal his rancid hostility and hatred for Congress and any other American whom he perceives in his dementia to be his enemy.

Fasten your seat belts. It’s gonna be bumpy summer as slimeballs like West, and the rest of the GOP/Tea Party/Fox News cabal of reprehensible weasels, unleash a torrent of incoherent vilification at anyone who dares to introduce fairness and truth into the public discourse on Benghazi or any other subject that twists the knickers of the unhinged right.