Let this be a lesson for you, Glenn Beck. The next time you go out on limb to defend the Tea Party from having any complicity with wrongdoing, remember who you are defending. After all, the Tea Party is a phony “grassroots” creation of the Koch brothers that is populated by bigots and birthers and an array of far-right fringe conspiracy wackoids. Of course, there are certainly some Tea Partiers that are simply misguided dupes, but the ratio of dupes to nuts makes it precarious to risk vouching for them. 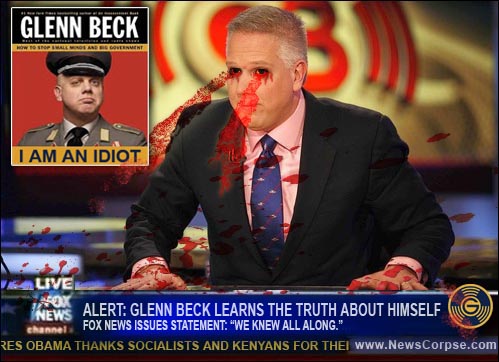 In this episode of Beck’s Lament, Clayton Kelly, a conservative blogger in Mississippi, was arrested for photographing the wife Sen. Thad Cochran who is a resident of a hospice and suffers from acute dementia. This was an utterly reprehensible invasion of privacy and one of the most revolting political dirty tricks conceivable. It is no wonder that Cochran’s primary opponent, Chris McDaniel, condemned the act and denied having any knowledge of it or the perpetrator.

However, when McDaniel was interviewed on Beck’s radio program, Beck complained about reports that associated Kelly with the Tea Party. Beck insisted that there was no connection between them and that the allegation was a scurrilous creation of the media. Beck’s co-host set up the defense by stating flatly that…

“This is not a Tea Party group. This is a nut job conspiracy theorist that has nothing to do with the Tea Party or the McDaniel campaign in any way.”

To which Beck adamantly responded…

Oh Glenn, go ahead and name him because, despite your proclamation, not everybody knows what you’re talking about (in fact, some of us hardly ever do). Sure we can guess, but we’ll need help narrowing it down from President Obama, Karl Rove, and Alex Jones. And we could probably also throw in George Soros and Cass Sunstein. And given the severity of your paranoid delusions, it may be someone else entirely.

Then Beck took up his defense of the Tea Party in earnest.

Let’s set aside the incongruous references to Malcolm X. In Beck’s cartoon brain that could mean anything. The real problem is Beck’s resolute insistence that the Tea Party is the victim of a vicious smear campaign by conspirators in the media. That’s a typical retort by knee-jerk partisans who rush to absolve the objects of their affection from any culpability for misbehavior. But in this case it backfired brutally because, as reported by the Wall Street Journal…

“The latest twist in the story is the arrest of Mark Mayfield, the vice chairman of the Mississippi Tea Party and a campaign supporter of state Sen. Chris McDaniel, Mr. Cochran’s primary challenger. Mr. Mayfield, according to his Facebook page, has volunteered for the McDaniel campaign and was a co-host for a McDaniel campaign fundraiser.”

Mayfield was charged with conspiracy with respect to the attempt to unlawfully photograph Cochran’s wife. His official capacity with the Mississippi Tea Party, as well as other local branches, destroys Beck’s feverish defense. What’s more, Mayfield was also identified as having a connection to the McDaniel campaign, a relationship that McDaniel later had trouble explaining away.

So virtually everything that Beck said about both McDaniel and the Tea Party has been proven to be false. Of course, that’s a state of affairs with which Beck must be familiar by now.