Establishment conservatives have long assailed fringe groups who believe that there has been a cover-up of government involvement in the attacks on 9/11. The “Truthers” have been ridiculed as conspiracy theorists who are something less than patriotic. The very act of implying a government role was viewed as misguided and disrespectful at best, treasonous at worst. So why is Fox Nation featuring this as their top story?

The story linked to by the Fox Nationalists doesn’t actually allege that anyone in government knew of a plot to bomb an airplane on Christmas. It merely restates what was previously disclosed in the press, and by the President, that there had been a “systemic failure” to correlate information from multiple sources that might have raised warning flags. That’s a far cry from knowing the identity of a specific Nigerian individual who had conspired with Yemeni members of Al Qaeda to blow up a plane on Christmas day. 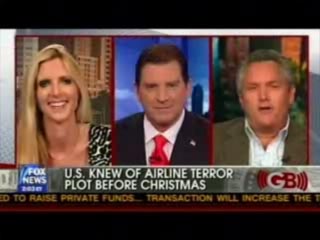 The glaringly misleading headline, that was also featured on Fox News and Foxnews.com, is identical in form to the Truthers’ claims regarding 9/11. So where is the outrage at this blatant promulgation of anti-American propaganda? How does Fox get away with espousing such repugnant disloyalty? Is it because the difference this time is that it is the Obama administration about which there is an insinuation of shared guilt? 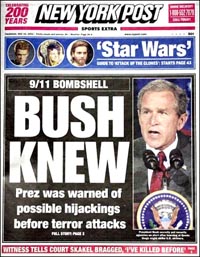 Before we presume that there is a partisan nature to this story, we need to take note of another Rupert Murdoch “news” vehicle that in May of 2002 was supportive of the 9/11 Truther movement. Just eight months after the attack on the World Trade Center, the New York Post published a story that charged then-President Bush with having prior knowledge of those attacks.

So maybe it is just that Murdoch is an equal opportunity accuser of the U.S. government with complicity in terrorism. Remember, Murdoch is a native Australian who moved to the U.K. before eventually applying for U.S. citizenship so that he could take control of the Fox network. So it’s difficult to ascertain to whom he has allegiance. Strike that. It is clear that Murdoch’s allegiance is only to himself, his rightist agenda, and his bank account. Any assessment of Murdoch’s motives as they are revealed by his media enterprises must be seen in the context of his obvious disdain for the United States, its people, and their welfare.