The movement to persuade advertisers from supporting Glenn Beck’s Acute Paranoia Revue has been surprisingly successful. Thanks to the efforts of Color of Change and StopBeck.com, over 100 advertisers have now affirmed that they will no longer permit their ads to be aired during Beck’s program. That’s here in the U.S. In the UK the situation is a little different.

Glenn Beck’s program on Rupert Murdoch’s Sky News in the UK has run for the past six days without any advertisements at all. 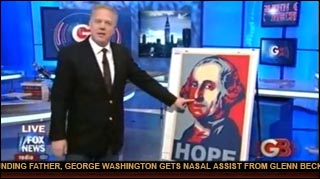 That’s right. Glenn Beck has become a non-profit, commercial-free, charitable donation of airtime courtesy of Rupert Murdoch and News Corp. Perhaps that is why Beck displayed a painting yesterday, that he says he did himself, showing George Washington in the style of Shepard Fairey’s Obama poster. Beck is probably “hoping” that his show will stay on the air even though it is scaring off advertisers faster than Osama Bin Laden’s dating video at eHarmony.

It is one thing to note that viewers have rejected Beck. His program is seen by less than 1% of the American population and polls show that 42% don’t even know who he is or have an opinion. However, it is another thing entirely when conservative corporations, including Wal-Mart and Home Depot, are embarrassed to be associated with his brand of hate and fear mongering. So here in the U.S. Beck has taken a considerable hit financially and is being kept afloat by dubious gold dealers and direct marketers.

But in the UK Beck is now completely ad-free. The significance of this, beyond the monetary, is that Rupert Murdoch must now be recognized as a brazen propagandist. He can no longer pretend to be a businessman making choices based on the best interests on his company. By granting Beck hours of free airtime despite the financial losses, Murdoch is neglecting his fiduciary duty to his shareholders. And he is doing it in order to continue the wingnut proselytizing of Glenn Beck. Perhaps the show should carry a disclaimer along the lines of PBS: “The Glenn Beck program is brought to you by a grant from Rupert Murdoch and the News Corporation.”

It will be interesting to see how long Fox can ignore this situation. The Advertiser Exodus began last summer, and critics at the time said it would be over by fall. Instead it has held fast and expanded. Someone needs to ask Murdoch how long he intends to carry this albatross at the next News Corp. shareholders meeting.

7 thoughts on “Number Of Advertisers For Glenn Beck In The UK: Zero!”