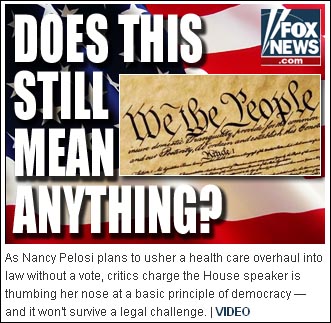 Fox News executives and defenders have been adamant that whatever bias exists at Fox, it is clearly delineated as opinion and is separate from what they regard as their hard news reporting. Never mind that even Fox admits that the majority or their schedule is opinionated and observers notice that much of that opinion seeps into their straight “news.” Further evidence of this seepage was apparent this morning on the Fox News web site. The image posted here was today’s featured story.

What this demonstrates is that it is getting harder to recognize the difference between Fox News and the Fox Nation (or for that matter, the Republican Party and the tea bagging, birther, secessionist, militias). The editorial pages of Fox are becoming indistinguishable from what they assert is news content. And while this has been obvious for some time on the air, it is expanding precipitously online.

The story referenced here is one that Fox is busily misrepresenting. They are portraying self-executing rules in Congress as illegal, unconstitutional, “Slaughterhouse” rules. But knowledgeable analysts are aware that these rules have been used many times by both parties. Norm Ornstein, of the conservative American Enterprise Institute, had this to say on the subject:

“I can’t recall a level of feigned indignation nearly as great as what we are seeing now from congressional Republicans and their acolytes at the Wall Street Journal, and on blogs, talk radio, and cable news. It reached a ridiculous level of misinformation and disinformation over the use of reconciliation, and now threatens to top that level over the projected use of a self-executing rule by House Speaker Nancy Pelosi. In the last Congress that Republicans controlled, from 2005 to 2006, Rules Committee Chairman David Dreier used the self-executing rule more than 35 times, and was no stranger to the concept of ‘deem and pass.'”

The key falsehood that Fox and their Republican patrons are peddling is that there will not be a vote on health care. The truth is that there have already been votes in both houses of Congress and the bill passed by significant majorities (in the Senate by a super-majority). And there is still a vote to be held to invoke amendments to the bill that includes the self-executing language. So any member of Congress voting “aye” on this is transparently voting in favor of the health care bill. It is not clandestine in any respect, and it is not an absence of a vote.

Nevertheless, Fox, Republicans, and conservative pundits, are castigating this routine procedure as nothing short of treasonous. Rep. Mike Pence (the #3 Republican in the House), called the rule unconstitutional, but when it was pointed out to him that he had previously voted for such a rule at least three times, he said “Yeah, sure.” So either he misspoke and the rule is constitutional, or he previously voted for a rule that he knew was not constitutional.

Conservative talk show host, Mark Levin, has threatened to take the matter to court to reverse any measure passed via this procedure. Would that mean that every bill passed in this way by Republicans would also be repealed?

Fox News legal analyst, Judge Andrew Napolitano, made a nearly incoherent argument that the rule is unconstitutional but that the Supreme Court wouldn’t interfere with congressional discretion. This is a (former) judge who actually believes that the Supreme Court would let stand a law despite considering it to be a violation of the Constitution. That’s just plain nonsense. The court can issue rulings that are debatable, or even wrong, but they do not issue rulings that are contrary to what they believe.

Fox News, on the other hand, has no problem reporting things that they don’t believe. It is entirely implausible that the editors and reporters at Fox don’t know about the use of self-executing rules. Yet they misreport on them anyway. And now they even characterize them as being unconstitutional when they know that that isn’t the truth. And those false characterizations are posted on their news pages and are not differentiated as opinion. Which is why you have to wonder if honesty means anything to Fox News.

4 thoughts on “Does Honesty Still Mean Anything To Fox News?”