Pandering to his geriatric demographic, Bill O’Reilly of Fox News devoted his lead segments to concern-trolling the welfare of Jon Stewart and Steven Colbert. The theme of his Talking Points Memo was whether or not the Comedy Central duo would have to “change their tone” now that “things are not going very well for the Obama administration.” 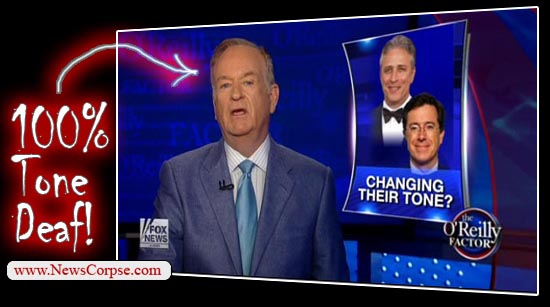 O’Reilly opened by asserting that Stewart and Colbert are unrepentant liberals who are committed exclusively to attacking conservatives and promoting President Obama:

O’Reilly: Here’s the problem with these guys. They prop up the Democratic Party and the liberal line, President Obama, by denigrating the opposition, the Republican Party, conservative people. That’s what they do. That’s how they function on a daily basis over there. Does it get more difficult to do that when the President and the party, the Democratic Party, are descending in the court of public opinion?

First of all, O’Reilly’s logic that Republicans cannot be satirized if Obama’s approval ratings decline is ludicrous on its face. If popularity, or the lack of it, is the driving factor as to whether a potential target of satire will be selected by a comedian, then it’s the Republican Party that can breathe a sigh of relief, because no matter how badly the President is doing, he’s miles ahead of the GOP.

But more to the point, O’Reilly is absolutely wrong in his assessment that Stewart props up Democrats and lives to denigrate the right. Apparently he doesn’t watch The Daily Show or even read Fox Nation (which is edited by his own producer, Jesse Watters). Over at the Fox Nation Lie-Fest they have published dozens of articles heaping praise on Stewart for either “destroying, tearing apart, eviscerating, or grilling” Obama and other liberals (see this list here). And if that weren’t enough, they also highlighted the many times Stewart “mocked, roasted, savaged, scorched, ridiculed, and obliterated” the President and his lefty allies (see this list here).

So where does O’Reilly get the idea that Stewart is propping up liberals? Like almost everything else that O’Reilly (and Fox News) spews, it is made up from whole cloth to advance the conservative agenda. But O’Reilly has his sycophantic guests that appear mainly to agree with him. On this program it was Fox News media correspondent, Howard Kurtz, who declared that Stewart and Colbert are now “out of the zeitgeist” due to their alleged failure to criticize the President. And who knows more about the zeitgeist than Kurtz?

However, Kurtz doesn’t seem to be paying any attention to Fox’s reporting either. That’s pretty damning for the person on the Fox roster whose job is specifically the media. Kurtz criticized Stewart’s coverage of the IRS affair because it contained “nothing about a cover up. He glossed over President Obama’s role.” Kurtz must have missed the fact that there is zero evidence of a cover up or any role by the President. That may have something to do with why Stewart left it out.

When Kurtz’s co-host on Fox’s MediaBuzz, Lauren Ashburn, chirped in to disagree with O’Reilly, she was immediately interrupted so that O’Reilly could ridicule her viewpoint and segue to insulting Stewart’s audience as San Francisco liberals smoking pot. That’s actually a reprise of an insult he flung a couple of years ago when Stewart was a guest on his show. At that time O’Reilly slammed the Daily Show audience (which is documented as being younger, smarter, and more successful than O’Reilly’s) by saying…

“You know what’s really frightening? You actually have an influence on this presidential election. That is scary, but it’s true. You’ve got stoned slackers watching your dopey show every night and they can vote.”

If that’s scary, then how much more frightening is it that the imbeciles who watch O’Reilly, and believe the fairy tales he spins, can vote (or buy guns, or operate cars and other heavy machinery)? O’Reilly concluded by thoughtfully worrying about Stewart and Colbert losing their audience since “they are going to have a harder time pleasing them with the collapse of the liberal establishment.” O’Reilly may have buried the lede in this program. Up until now, most people were probably unaware that the liberal establishment had collapsed. That should have been his headline. Of course, it’s just as phony as everything else he says, but why should that matter to the biggest phony on the phoniest network?