Sarah Palin achieved her main objective yesterday with an article on the Zombie Breitbart News website that declared that “It’s Time To Impeach President Obama.” Her objective, of course, was to garner media attention for herself. But aside from the litany of Obama-phobic nonsense that made up the bulk of her rancid rant, the notion that Palin was just awakened by a revelation to discover the imminent need to file Articles of Impeachment against President Obama is another lie perpetrated by Palin and the fawning media stooges that trail after her and lap up the slime left by her immaculate footsteps. 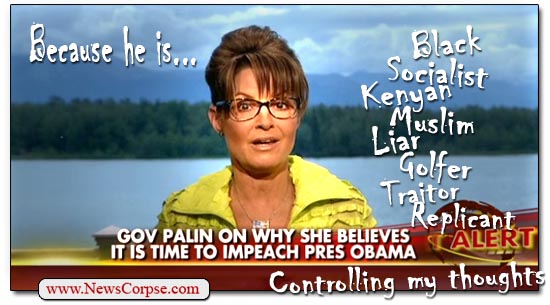 The truth is that Palin has previously called for Obama’s impeachment at least twice. It is a common theme among her Tea Party contingent that has never regarded Obama’s presidency as legitimate. Even without resorting to the extremist latitudes of impeachment, the unfiltered accusations that cast Obama as an anti-American socialist, who is deliberately working to destroy the country, are evidence of the depth of the delusion by the paranoid right. Then add in the impeachment mantra and what you have is a manic agitator throwing chum into the water to feed the cravings of the baby barracudas.

Palin’s previous entreaties for impeachment were just as devoid of any factual basis as her latest one. But they were no less ludicrous and lacking substance:

6/13/2014: I sense not enough guts in D.C. to file impeachment charges against Team Obama for their countless documented illegalities.

This was just last month (how soon the feeble-minded forget) and it also cited immigration as the justification for removing the President from office. Never mind that Obama has supported a comprehensive immigration bill that was passed in a rare bipartisan vote in the senate last year, but that GOP Speaker John Boehner has refused to allow it come to the House floor for a vote because he knows it would pass.

This is a laughably incoherent remark stemming from the disastrous government shutdown last year wherein Palin is asserting that Obama should be impeached if he defaults on the national debt (which he was trying to prevent the GOP Congress from doing), but also threatens impeachment if he takes steps to pay the debt. A damned if you do, damned if you don’t – ah just damn you to hell for whatever – proposition.

Palin took her Impeach-a-Thon to Fox News last night in a visit to the Sean Hannity show. As usual, her patented brand of word-salad ramblings offered nothing more than frothing hatred of all things Obama. And she also admitted that her motivation for impeachment is based on policy differences, not law, when she said that Obama intended…

“…to fraud the American people on these programs, these policies that he has promised will work or will not impact debts or deficit. These have been lies by our President. Yes, those are impeachable offenses.”

No, they are not. And the Obama administration has actually cut the deficit in half, just as he promised to do in his campaign. But reason never plays a part in Palin’s world. For instance, she also told Hannity that “You don’t bring a lawsuit to a gunfight.” What she is referring to here is, to say the least, obscure. Impeachment is a legal proceeding. So is she now abandoning her call for impeachment and escalating it to a call for armed rebellion? She clearly sees her solicitations as a movement and even said so explicitly:

“If people care about the future of this country and defense of our republic, they will join this cause of Articles of Impeachment against Barack Obama because enough is enough.”

If you have the stomach for it, here is the video of Palin on Hannity. It is the perfect representation of her mental disorder, with a manner of articulation that seems to have been styled by political satirist. Only she is one hundred percent serious. Which makes it both funnier and scarier.