The “Quitta From Wasilla” is making headlines again by displaying symptoms of acute Obama Derangement Syndrome. Sarah Palin, the 2008 GOP nominee for Vice-President, who was soundly rejected by American voters, is now calling for the impeachment of President Obama (again), who was elected twice with significant majorities. 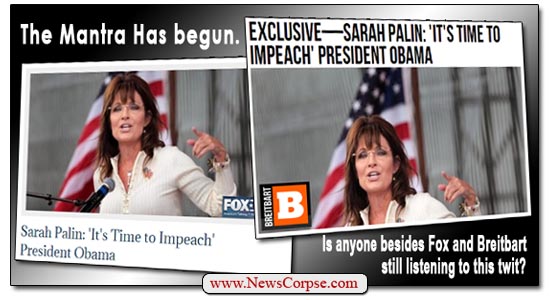 Palin’s panicky challenge to the Psycho Chicken Littles she commands from the parapets of her Facebook page cites the standard menu of wingnut atrocities that Tea Party dimwits cling to so fiercely (i.e. fundamental transformation, American exceptionalism, etc.). What her unhinged freak-out failed to provide were any actual legal justifications for impeachment. You know…high crimes, misdemeanors, jaywalking, anything remotely deserving of removal from office. With a completely empty basket of goodies, Palin launched her tirade saying that …

“Enough is enough of the years of abuse from this president. His unsecured border crisis is the last straw that makes the battered wife say, ‘no mas.'”

That’s a nice touch. In that one opening sentence Palin likened President Obama to a wife beater with America as his victim; she pandered to the Latino immigrants she so often disparages by demonstrating her trifling command of the Spanish language, which she and her disciples insist must never be spoken within U.S. borders; and she lied about the President’s record on immigration, which has reduced unlawful entries and increased deportations.

From there Palin portrays the perilous journey of immigrants as a leisure trip wherein the brown hordes will “kick off their shoes and come on in.” It’s just like a big pool party in her view. But even worse, she completely fails to grasp the needs and desires of the American people by misrepresenting their priorities and the consequent duties of the President.

“There is no end in sight as our president prioritizes parties over doing the job he was hired by voters to do. Securing our borders is obviously fundamental here […] communities become unrecognizable and bankrupted due to Obama’s flood of illegal immigration.”

There is a bountiful cache of supid in that paragraph. First of all, what she calls “Obama’s flood of illegal immigration” was put in motion by George W. Bush’s signature on an anti-child trafficking bill in 2008, that requires the government to provide minor immigrants with legal representation and safe and secure housing while awaiting resolution of their status. And Palin did not, and can not, cite an example of a community that is unrecognizable, save for the one she can see from her house in Alaska.

More to the point, Palin’s assertion that immigration is job one for the President ignores the fact that most polls on the priorities of the American people actually put jobs as job one (20%). Immigration, while a serious matter that needs to be addressed, is not particularly high on the list of things Americans want their government to work on. In fact it is often near the bottom of that list (3%).

It is pathetic that people like Palin are making monsters out of children who find themselves in an untenable position. They are alone and frightened by the prospect of being returned to countries where they live in danger and poverty. And now they are further terrorized by insensitive Americans who scream at them and threaten them and put up barricades to prevent them from reaching safe harbor. It’s atrocious behavior that is embarrassing to the majority of Americans who reject such hatefulness. 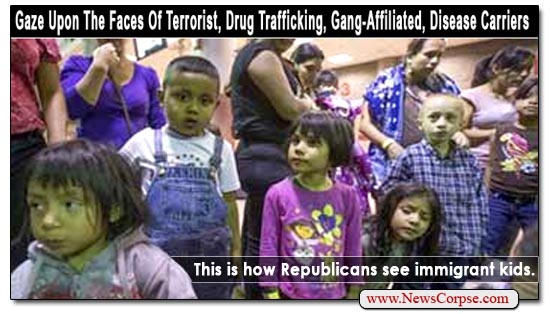 Palin concludes her rant with a generalized lashing out that offers no substance or reason – just hostility and spittle-inflected animus toward the man that America elected twice and summarily threw her in the political gutter.

“It’s time to impeach; and on behalf of American workers and legal immigrants of all backgrounds, we should vehemently oppose any politician on the left or right who would hesitate in voting for articles of impeachment. The many impeachable offenses of Barack Obama can no longer be ignored. If after all this he’s not impeachable, then no one is.”

Palin, like many of her comrades on the irrational right, have no idea what impeachment means or how it is invoked. She failed to provide even a single example of a valid impeachable offense, even though she says that there are many of them. And her hysterical overreach is in harmony with the conservative pseudo-patriots who are salivating at the prospect of winning a majority in the Senate this November so they can pursue their anti-democratic agenda and oust the man that they pledged, from the moment he was inaugurated, to destroy.

For this reason it is imperative that Democrats break out of their traditional mid-term complacency and actually get out and vote this year. If they don’t, they can expect with near certainty that Republicans will try to impeachment Obama. And with that will come all the attendant political soap operas and antagonisms that the nation really doesn’t need as there are numerous other issues to address without having to poison the atmosphere with a politically driven show trial. If after all this Democrats don’t vote in record numbers, they will wake up the day after the election with two year long migraine.