The buffoons at Breitbart News put their alleged journalistic skills on display again with an article that demeans Democratic congresswoman Barbara Lee by chopping up her remarks at a hearing on immigrant children. 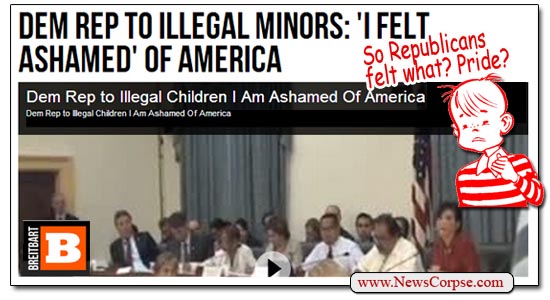 Lee spoke to the issue of how these kids have suffered, both on the harrowing journey from their homes, and the treatment they received at overcrowded detention facilities here in the U.S. Her empathy for the hardships faced by children in dire circumstances was not shared by the BreitBrats. They posted a video fragment of Lee’s remarks, then truncated it to make it appear that she was “ashamed of America.” Here is the expanded version of her statement:

“In listening to your testimony I felt ashamed and I ask my colleagues are you talking about America? Is this America, where you have fled and were treated as you were. So I want to directly say to you this country is a country that stands for liberty and justice for all.”

Clearly Lee was merely expressing her shame for the difficult conditions to which the kids were subjected, and not for America, which she praised for its principles of liberty and justice. But that didn’t stop Breitbart (and Fox News who reposted the article on their lie-riddled Fox Nation website) from misrepresenting her words. And if that weren’t bad enough, they also referred to the children as “illegal minors.” What is that? Kids who are underage without permission? It is telling that the racists who use the term “illegal” to describe human beings never call bank robbers, or rapists, or even terrorists illegals.

The upshot of the article criticizing Rep. Lee is that the conservatives at Breitbart, and throughout right-wing culture, apparently feel no shame when they see children enduring a misery over which they have no control. The heartless Tea Party set seems unmoved by the grief of these innocents. They may, in fact, feel proud. And after dismissing the pain and fear of the kids, the BreitBrats make matters worse by casting aspersions on those who genuinely care.

Funny, they never seemed to mind when Rush Limbaugh actually did said say that he was ashamed of America. 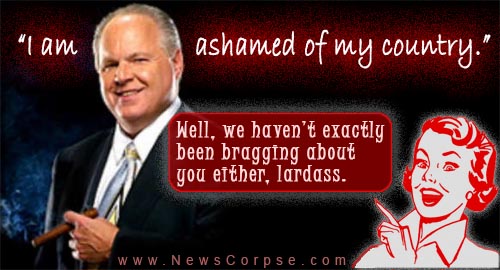