When an alleged doctor has already established a reputation as a world class crackpot by, among other things, expressing his admiration for the Unabomber, it may seem that there is no further he could fall into the abyss of madness. But leave it to “psycho” analyst Keith Ablow, a member of the Fox News A Team, to exceed all expectations of depravity.

In a new Fox News editorial, Ablow purports to go “Inside the mind of James Foley’s ISIS executioner.” Ablow has previously gone inside the minds of at least thirty-five other individuals, including President Obama. His prodigious ability to channel the psyche of people whom has never examined, or even met, is itself a symptom of psychosis. But his analysis of an unknown terrorist’s brutality sets new standards for quackery as he associates the behavior with that of a vampire slayer. Call it the Buffy Syndrome. 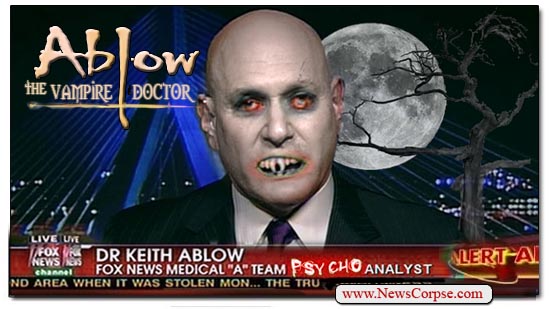 For a scary collection of Fox News lies…
Get Fox Nation vs. Reality. Available now at Amazon.

Ablow begins his analysis of the ISIS executioner with a cringe-worthy attempt to humanize him. Ablow admonishes those who would vilify the man who decapitated Foley with his bare hands as “an unthinking monster,” and reminds his readers that he likely has family and friends, has laughed and wept, and may have read and written poetry. What a guy. This sort of perverse empathy is something that Ablow does not afford to President Obama, who he has pointedly dehumanized saying that…

“…he doesn’t hate us. He simply isn’t there to hate or love. Because, guess what? Long ago he severed himself from all core emotions.”

It says a lot about Ablow’s emotional pathology that he finds consonance with the ISIS butcher, but not with Obama or the millions of Americans who elected him twice. Ablow explains the innermost motivations of the executioner with a peculiar pop culture reference:

“His line in the sand separates worthy human beings from those lost, evil souls whose failure to accept the Prophet Muhammad and live according to a particular interpretation of fundamentalist Islamic law makes them no different from vampires who can infect the rest of the human race with venom and claim them for the plague. […] the ISIS executioner was in the grip of a psychotic delusion. He wasn’t killing a real person; he was killing a monster”

What a barrel of pseudo-psychological hogwash. How does this fraud get away with calling himself a doctor? The man who murdered Foley couldn’t care less about his politics or his faith. This was nothing more than a depraved PR stunt devised solely for its shock value. They were attempting to coerce the United States into halting its airstrikes targeting ISIS. It was a strategy for which there could be no result other than failure, as evidenced by the airstrikes that immediately followed the execution. And it’s interesting that Ablow’s vampire theory includes rhetoric about infection and venom, because he has used that before with regard to Obama when he proposed the need “to immunize our sons and daughters against the president’s psychologically toxic rhetoric.”

It isn’t the butcher of ISIS who views people as vampires and infectious threats. It’s Ablow. He then goes on to contradict his previous inanities that humanized the enemy by saying that…

“You can’t reason or negotiate from a distance with a person in the grip of a psychotic delusion that defines others as the evil vectors of a horrifying plague. The delusion owns that person’s mind. […] The only way to stop the ISIS executioner and those in the grip of the same psychotic delusion is to kill the ones who cannot be captured, wherever they can be found, in whatever numbers possible.”

Let’s just set aside the fact that it is Ablow whose delusions own his mind and who has defined Obama as the evil vector of a horrifying plague. He has also abandoned his theory that the terrorists are misguided souls with family and friends who must not be dismissed as unthinking monsters. Now they are delusional psychotics who must be exterminated. And with that, Ablow has adopted the mindset that he previously attributed to the terrorists. And it’s a mindset that he believes is on the ascent when he says that…

“…we cannot believe for one moment that the psychosis will not spread and threaten us all with delusional assassins who are reading poetry and looking at the stars and hugging their kids and dreaming of slicing our throats and those of our children from ear to ear, in order to save the world.”

The message in this that we must all be fearful of the poetry reading undead who are amassing to feast on our blood. It is the Twilight Saga Gone Wild. From Ablow’s perspective it is impossible not to imagine that, if the ISIS executioner were to remove his hood, we would find a dreamy Calvin Klein model whose plaintive expression evoked a tortured and complex soul who only wants to be loved. [Cue eerie music and montage of sighing teenage girls]

One thought on “The Vampire Doctor: Fox News “Psycho” Analyst Goes Inside The Mind Of ISIS”