Another noggin-smackin moment brought to you by the boneheads at Fox Nation. Known for promoting idiotic claims, asinine assertions, and brazenly biased distortions of political affairs, Fox Nation has once again stretched their tabloidy, pseudo-journalism to the farthest reaches of absurdity. 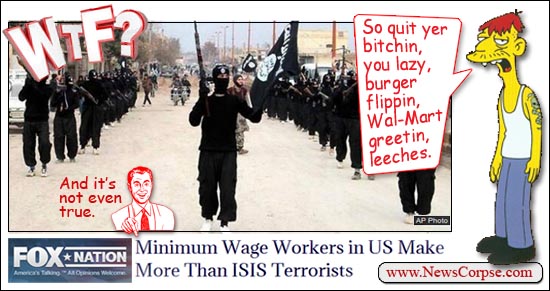 For even more examples of Fox’s idiocracy…
Get Fox Nation vs. Reality. Available now at Amazon.

Yep, Fox Nation thinks it is somehow important to compare the wages of low-income Americans with the terrorist foot soldiers of ISIS. What point they are hoping to make is incomprehensible. Are they trying to persuade ISIS terrorists to give up their (almost literally) dead-end jobs and relocate to Omaha to work at Arby’s? Are they trying to short circuit the movement for a fair wage in the U.S. by shaming minimum wage workers into silence? Is it a source of pride for Fox that Americans struggling to support their families are financially slightly superior to jihadists?

The stupidity of this piece boggles the mind. And as if the comparison alone weren’t ripe for ridicule, the facts are completely wrong. According the article on Fox Nation (sourced to bloggers at RightScoop), ISIS soldiers earn $400.00 a month, plus their housing is paid for. They also receive a stipend of $50.00 for each child and $100.00 for each wife. An apartment rental in the ISIS stronghold of Mosul, Iraq, goes for an average of $900.00 a month. Therefore, the terrorist benefits package for a fighter with one only wife and two kids is $1,500.00 per month. However, with the current federal minimum wage of $7.25 per hour (regardless of wives and kids), Americans earning that amount get a monthly salary of about $1,257.00. So the terrorists actually have a better deal. And that doesn’t even count their free heating oil and gas for their car.

Additionally, American soldiers also make less than their counterparts in ISIS. According to the Department of Defense, a beginning soldier’s salary (pay grade: E1) is $1,417.00 a month. That also includes housing, but not 72 virgins if you become a martyr.

So if Fox were interested in telling the truth, something they have little experience with, they would end up promoting service in the army of the Islamic State. And since they already believe that ISIS is smarter than we are and that “We’re the dumb ones,” maybe this is all part of their mission to pump up the enemy and realize their dream of an attack in the U.S. that they can blame on our secretly Muslim president.