On Tuesday Media Matters published their analysis of Fox News bias during coverage of a Senate hearing on President Obama’s plans for dealing with ISIL. Media Matters showed that during Fox’s broadcast they would air remarks by Republicans on the committee and then cut away when Democrats began to speak. The result was that Republicans were given twice as much airtime as Democrats on the allegedly “fair and balanced” network. This is an old tactic by Fox which News Corpse documented last year in another Senate hearing.

Today PolitiFact weighed in with an article seeking to confirm the data that Media Matters reported. They found that…

“Media Matters said that Fox News gave Republican senators twice as much air time as Democratic ones during a Senate Armed Services Committee hearing. They said Republicans got 16 minutes compared to the Democrats’ eight. That matches our count.

“We also found that other networks provided more time and more evenly divided time to members of both parties.

“We rate the claim True.” 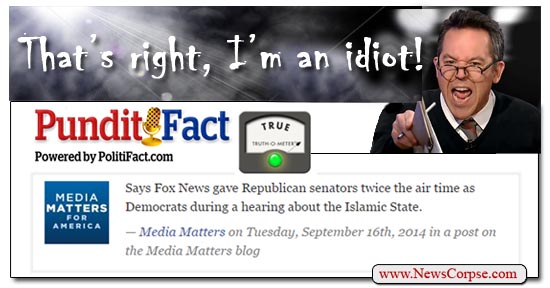 This is not exactly breaking news. Media Matters is a reliably consistent source for accurate information about the biases and partisan excesses of right-wing media. What makes this interesting at this time is that it occurred almost simultaneously to a feverish rant by Fox’s Greg Gutfeld, co-host of The Five. Gutfeld was perturbed by reports that cited Media Matters research showing the obsession that Fox News has for the Benghazi hoax. The study revealed that Fox aired nearly 1,100 reports on the subject, most of which were decidedly slanted to the right. For instance, 97% of the congressional interviews on Fox relating to Benghazi were with Republicans.

The accuracy of Media Matters’ reporting, however, was immaterial to Gutfeld’s rightist indignation. He let loose on Media Matters saying that…

“…the left-wing hacks would just work from Media Matters’ press releases […] It’s much easier than doing original research to just read from a press release.”

That’s true. And it’s also hilariously ironic coming from a Fox News flunky. The reporting that Gutfeld was complaining about just happened to be unarguably correct, as noted by PolitiFact. But his griping over journalists using research from Media Matters is just plain stupid. Every media organization uses research from independent sources to augment their reporting. Often they latch onto providers with viewpoints that are aligned to their own. And, of course, Fox News is one of those media enterprises that does this. In fact, Fox’s Brit Hume gave a slobbering endorsement to one of the most blatantly partisan research outfits, the Media Research Center. Hume praised them saying…

So according to Gutfeld, Hume is a “lazy hack sitting with his laptop, covered in Cheetos.” And if that weren’t bad enough. Gutfeld must have entirely missed the scandal when Fox News was caught red-handed reporting verbatim from a Republican Senate press release as if it were their own reporting, complete with a typo that appeared on the original. And then there was the time that Fox’s Megyn Kelly did the same thing with a press release issued by the Republican National Committee, pretending it was authored by the Fox news staff.

Clearly Gutfeld doesn’t know what he’s talking about. He’s too focused on being the comic relief for the network, but instead comes off like the boneheaded sitcom neighbor who mistakenly thinks he is either funny or suave. In the end he is little more than a troll working for a network that has once again been proven to be an unrepentant purveyor of lies. And their practice of airing Democrat-free Senate hearing just insures that their audience of misinformed dimwits will remain ignorant.

And speaking of Fox News lies…
Get Fox Nation vs. Reality. Available now at Amazon.