When you are relentlessly bombarded with exaggerated, alarmist calls to fear every shadow in your path, grasping onto anything that provides even temporary comfort becomes a necessity to retain some semblance of sanity. That’s the position many gullible adherents to the fear-mongering war-hawkery of the right find themselves in. They are so inundated with panicky howling that America, and the world, are succumbing to certain and imminent doom that they need to suck on psychological pacifiers to keep from having mental breakdowns. 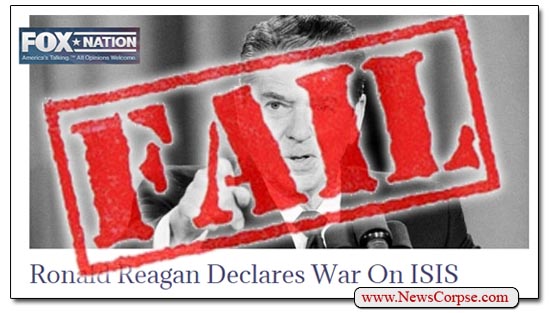 Thus, an enterprising yarn spinner at a conservative blog composed a fairy tale that perfectly fits the bill for these unstable Tea Party types. And it was promptly posted on Fox Nation, the community website for Fox News. The tale comes in the form of an imaginary speech by their long dead savior, Ronald Reagan. But how this can assuage the anxiety of these worrywarts is a mystery considering how absurdly constructed it is.

It begins by asking “How different would our response as a nation be if the Commander-in-Chief were Ronald Reagan?” The answer to that, however, cannot be reliable surmised since the only military conflict that Reagan oversaw was the invasion of the tiny Caribbean island of Grenada. That was not exactly a proud victory for the armed forces of the world’s biggest superpower.

The fantasy speech lays out the justification for unbridled fright by saying that “Today we face a threat the likes of which we have not seen since the darkest days of World War II and the Cold War.” This specious claim mirrors that of today’s Republican scaredy-cats like Sen. Lindsey Graham who believe with all their hearts that the desert rats in Syria are coming to our shores to slaughter us all. Never mind the reality that there are only about 30,000 ISIL fighters, which is far less than the Axis forces of World War II that numbered in the millions. They can hardly be capable of doing the sort of damage that Hitler and his comrades did. The important thing for the fear trade is to convince the peasants that every enemy is the worst the world has ever seen.

Continuing on that theme, Zombie Reagan says that “We never faced members of the SS or the KGB prepared to be suicide bombers. Today we do.” I suppose we can forgive the Gipper for having a bad memory since he is, you know, dead. But the Japanese famously deployed Kamikaze pilots who were into suicide missions long before Al Qaeda thought it was cool. What’s more, many wartime tactics involve plans that the soldiers know they are not likely to return from. Just because they are not officially designated as suicide missions doesn’t mean that the soldiers aren’t aware of the expected outcome. Yet they follow their orders despite that knowledge.

Of course, for this declaration to be plausibly Reaganesque, it has to contain some of the movie hero bravado that was such a big part of his public imaging. He had to reflect the egocentrism that is the hallmark of the American Exceptionalist crowd. Only the U.S. of A. can send the message that will send our foes into shivering spasms of dread. Ergo…

“Our Muslim and Arab allies must be the frontline in this conflict, but without America’s fighting with them, this war will not be won. Not simply because our forces are so superior, but because if we are not prepared to send our people in harms way to fight the barbarians that wish to destroy our civilization, then we send a very simple message to the Enemy and to the world: our civilization is not worth saving.”

Zombie Reagan closes by articulating a theory that sounds very much like the Obama Doctrine. And if any of the Reaganites ever catch wind of that they will immediately flip-flop and refute it. But it is unmistakably reminiscent of the tactics favored by the current administration.

“Our enemy is not ISIS, the Islamic State, or even Al Qaeda; it is the ideology that drives all such barbaric groups. […] But we must learn the lessons of the past. When fighting totalitarians, it is never enough to defeat them militarily. One must defeat their ideology.”

Not very Reagany, is it? Fox News has been working overtime to convince the nation that there is only one solution to the ISIL problem. It was prosaically proffered by their military analyst Lt. Col. Ralph Peters (whose name translates to “vomiting dicks” in Slanglish), who said the measure of success is “acres and acres of dead terrorists.” Now, after advancing that plan, Zombie Reagan comes along to adopt Obama’s method of draining terrorism of its appeal and recruiting capability.

The ultimate folly with resurrecting Reagan to rally the wingnut troops is that it can’t help but remind people that his leadership was rampant with failure. How different would our response be if Reagan were running things? Well (as Reagan would say), he cut and run after 200 Marines were murdered in their barracks by a suicide bomber in Lebanon. He sold weapons to our enemies in Iran in violation of international law. He used the proceeds of those sales to finance death squads in Nicaragua in violation of federal law. He failed to respond after an Iraqi jet aircraft fired missiles at the USS Stark, killing thirty-seven Navy personnel. He neglected the suffering of blacks in South Africa, called Nelson Mandela a terrorist, and opposed the Comprehensive Anti-Apartheid Act, which was passed by Congress over his veto. Obviously, Reagan’s legacy is not one of vanquishing dangerous foes. But he wasn’t bad at asking, in stern tones, for walls to be torn down. Even that milestone didn’t occur until the administration of his successor, George H.W. Bush.

All in all, it’s a good thing that Reagan isn’t running things today. If Republicans want to pretend that he would have produced better results than we are seeing now, they are welcome to indulge their fantasies. That’s mostly what they do anyway by watching Fox News all day. But America, and the world, have big enough problems that we certainly don’t need them exacerbated by one of the worst presidents of all time.