Since when is a wheelchair an attack? Since the excitable pearl-clutchers at Breitbart News (and their fainting Fionas at Fox Nation) got wind of an effective campaign ad by Wendy Davis, the Democratic candidate for Governor of Texas. 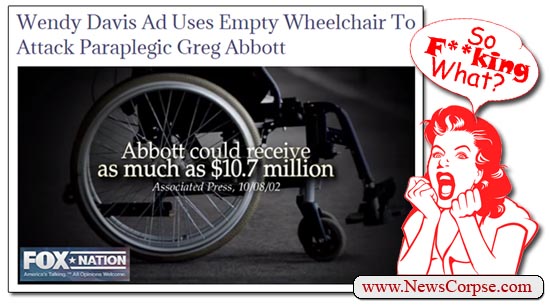 The Davis ad (video below) is a stinging indictment of her Republican opponent, Greg Abbot, who has handsomely benefited from a personal injury lawsuit, while throwing legal roadblocks in front of others seeking just compensation for similar negligent or malicious conduct. The ad reveals an abhorrent hypocrisy that deals out misery to people who have already been victimized.

Yet somehow, the rightist media hacks have dredged up a phony sense of outrage over the image of a wheelchair in the ad. Abbott has been confined to a wheelchair since he suffered injuries from a falling tree. The Abbott campaign joined in on the bitch-fest, issuing a furious response that oozes with artificial anger over this alleged affront:

“It is challenging to find language strong enough to condemn Sen. Davis’ disgusting television ad, which represents a historic low for someone seeking to represetn Texans,” said Abbott spokeswoman Amelia Chase. “Sen. Davis’ ad shows a disturbing lack of judgment from a desperate politician and completely disqualifies her from seeking higher office in Texas.”

Curiously, Abbott’s statement never explains what they found “disgusting” about the ad. It also never bothers to refute any of the substantive allegations that the ad presented, including Abbott’s legal efforts against a rape victim and an amputee. Those overtly anti-victim, pro-corporation actions by Abbott are ignored by his spokesperson in favor of an irrational rant about the image of a wheelchair.

Yet the reason why a wheelchair is considered insulting is unclear. It hardly seems likely that most wheelchair users regard their form of transportation as offensive or the sight of it as a smear. In fact, the implication that just showing a picture of a wheelchair constitutes an attack says more about the accuser than the party who ran the ad. It says that the wingnut press and the Abbott campaign regard a wheelchair as something objectionable and not proper to be seen in civil society. That, of course, is insane. But when a campaign has nothing else of substance to say, they will resort to absurdities like this and fake outrage.

For the record, Davis’ ad is in no way disparaging to anyone who uses a wheelchair. The ad criticizes Abbott for seeking and receiving legal redress for his injuries and then making it his mission to prevent anyone else from having the same rights. If you want to see politicians disparaging disabled people, you need to look at the Republicans like Saxby Chambliss, who morphed triple-amputee Vietnam veteran Max Cleland into Osama Bin Laden; or Rush Limbaugh who repulsively mocked Michael J. Fox’s Parkinson’s disease; or former congressmen Joe Walsh and Allen West who questioned the patriotism of another wounded warrior, Rep. Tammy Duckworth. Those are real examples of despicable disrespect, unlike the made up controversy that Abbott is peddling.

For more documented absurdities from Fox…
Get Fox Nation vs. Reality. Available now at Amazon.

[Update: 10/13/14] Fox News joins the fray asking if the Davis ad is the most offensive of the year. They must have missed the ad for GOP candidate Wendy Rogers that disgustingly exploits the execution of James Foley by ISIL terrorists. The Rogers ad follows one by another GOP candidate, Allen Weh, who did the same thing. 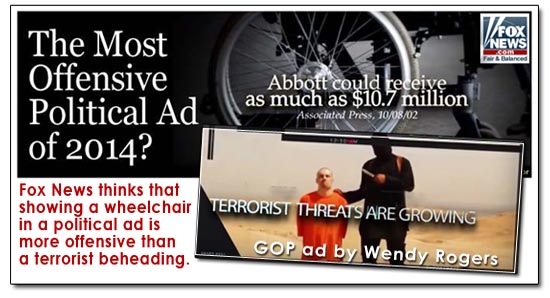 7 thoughts on “So F*cking What? Wingnuts Freak Out Over Wendy Davis Ad With Wheelchair”