During President Obama’s speech on immigration Thursday, he made the case for delaying the deportation of family members of U.S. citizens with a moral argument against separating families and demonizing those who came to America seeking a better life. Part of the justification he used were references from the Bible. The President said that “Scripture tells us that we shall not oppress a stranger, for we know the heart of a stranger –- we were strangers once, too.” Indeed, the Bible makes numerous references to the treatment of others, including foreigners. Leviticus 19:33-34 says

“33. And if a stranger sojourn with thee in your land, ye shall not do him wrong. 34. The stranger that sojourneth with you shall be unto you as the home-born among you, and thou shalt love him as thyself; for ye were sojourners in the land of Egypt.”

The morning following the President’s speech, the Kurvy Kouch Potatoes of Fox & Friends discussed his remarks and were, not surprisingly, appalled (video below). However, their outrage was not limited to the standard kneejerk Fox objections to anything Obama does and says. Extending the wingnut talking points beyond the crackpot allegations of tyranny and lawlessness, they ventured into decidedly more hostile and racist territory. 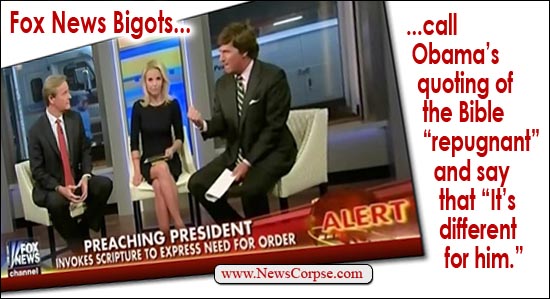 What rankled the tender sensitivities of the co-hosts Steve Doocy, Elizabeth Hasselbeck, and Tucker Carlson was that Obama had the temerity to express himself through his faith. The exchange that took place was a nauseating display of intolerance and undisguised hatred. It began with Carlson condemning Obama for “lecturing” on faith.

Carlson: For this guy specifically, the President, who spent his career defending late-term abortions, among other things, lecturing us on Christian faith? That’s too much. This is the Christian Left at work, and it’s repugnant. […]
Carlson: To quote scripture? That is just totally out of bounds.
Hasselbeck: Do you think it’s out of bounds that I just quoted scripture?
Carlson: No.
Doocy: It’s just different for him.

It’s just different for him? In what way? They never bother to get into it any deeper than that. but just the suggestion that a different standard exists for “specifically” this president reeks of bigotry. Whether it is rooted in race or politics it is disgusting and completely outside of the expertise of these hate mongers to pass judgment.

The statements by the Fox & Unfriendly crew would be bad enough without any other factors to consider. They are not remotely qualified to interpret either the Bible or any person’s intentions in citing it. However, as Media Matters noted, their commentary exhibited a rather astonishing measure of hypocrisy.

“It was only 48 hours prior to their November 21 broadcast that Fox & Friends criticized Obama for not espousing Christian values often enough. […they asked viewers to…] remember the time when American presidents weren’t afraid to talk about traditional values, as Ronald Reagan did back in 1981.”

So Obama is immoral when he doesn’t mention God, and repugnant when he does? And it’s OK for Reagan to wrap himself in biblical justifications for his agenda that included demonizing the poor as “welfare queens,” throwing the mentally ill out of institutions and unto the street, labeling Nelson Mandela a terrorist, selling arms to hostage takers in Iran, and using the proceeds to bankroll murderous rebels in Nicaragua. But for Obama to advocate for the unity of families is “totally out of bounds.”

The flagrantly biased, hateful, and hypocritical hosts of Fox & Friends might want to look to a recognized authority on Christian faith for guidance on how to deal with immigrants.

Pope Francis: Migrants and refugees are not pawns on the chessboard of humanity. They are children, women and men who leave or who are forced to leave their homes for various reasons, who share a legitimate desire for knowing and having, but above all for being more.

7 thoughts on “Obama Quoting Scripture Is Repugnant To Fox News”