As America’s number one network for extreme, right-wing political bias and propaganda, Fox News relishes every opportunity to disparage their ideological foes and to sanctimoniously exalt themselves as protectors of their twisted versions of the truth. One of the favorite tactics of Fox News is to taunt public figures who make the completely rational decision to avoid the abuse that they would endure were they to submit to being interviewed by the network’s bullies and ignorant partisans. This week there was another example of that attempted intimidation by Fox’s media reporter, Howard Kurtz. 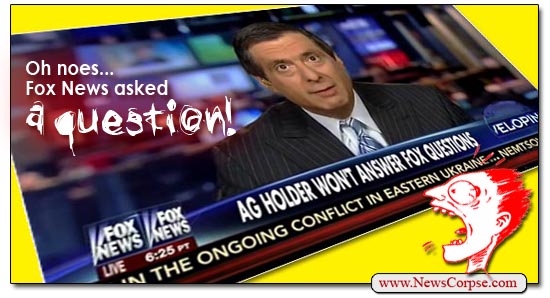 Kurtz appeared on The Kelly File with fill-in host and terrorist profiler Shannon Bream, a former beauty pageant contestant and graduate of Jerry Falwell’s Liberty University with no journalism training. The topic of the segment was departing Attorney General Eric Holder’s scheduled interviews with some news networks that did not, as of yet, include Fox. Bream queued Kurtz up by asking “Does he help himself at all by walking out the door and slamming it in our faces.” That totally unbiased question got this response from Kurtz:

“I think that it’s a sign of confidence when any politician, political figure, cabinet officer, congressman, is willing to sit down and take tougher questions from those you might perceive to be your harshest critics. […] Is the nation’s top law enforcement officer really afraid of [Fox News anchor] Bret Baier?”

Any suggestion that Holder, or anyone else who chooses to keep their distance from Fox News, is afraid of them is utter nonsense. That’s like saying you’re afraid of being interviewed by Honey Boo Boo, when the truth is you’re just smart enough to not waste your time. Notorious liar Bill O’Reilly has used the accusation of fear repeatedly, but frankly I’d be more afraid of Honey Boo boo.

Furthermore, if Kurtz even bothers to take his own analysis seriously, then why doesn’t he apply it to Republicans? He seems so disturbed that a single administration official is waving off Fox News, but he doesn’t seem bothered at all that the entire Republican Party is boycotting MSNBC. Reince Priebus, the chairman of the Republican National Committee has stated publicly that there will be no GOP presidential primary debates on that network. There will be four on Fox. Therefore, according to his own logic, Kurtz is implying that that every single one of the GOP candidates for president are afraid of Rachel Maddow?

What’s even more interesting about this is that the GOP candidates are even afraid of the friendly venues they have chosen for themselves. The RNC has drastically reduced the number of debates and assumed control of who will moderate them and ask questions. That was done to avoid a repeat of the embarrassing displays put on by Republicans during the 2012 election cycle. On one hand that may be a wise decision on their part considering the proclivity for Republicans to say stupid things. On the other hand it shelters them from the real world of political brawling that might toughen them up for the general election. And it exposes them as fearful of letting their candidates express themselves by taking positions for which they would later be held accountable.

After being left off of a preliminary list of networks that would be interviewing Holder, Fox News VP Michael Clemente whined that Holder’s reluctance to subject himself to the petty carping of Fox’s confirmed haters does a disservice to “the interests of a free press.” Apparently he doesn’t understand the phrase “free press.” You have to wonder where he gets the notion that a free press requires every public figure to submit to every media outlet, no matter how disreputable and hostile. It would be more correct to applaud Holder for showing respect for a free press by declining to validate Fox’s deceitful brand of pseudo-journalism.

Whether or not Holder grants Fox News an opportunity to malign him in person, it is clear that neither he, nor anyone else, is afraid of Fox. They just show it the measure of respect it deserves. But Republicans are demonstrating that they terrified of MSNBC and every other media outlet, including Fox, by implementing a policy that prohibits them from engaging in any public debates that aren’t sanctioned by the party apparatchiks. That’s a story that Kurtz will never report.

5 thoughts on “Despite Their Own Conceit, Fox News Is About As Scary As Honey Boo Boo”