The Right-Wing Media Machine operates on the principle of keeping a united front for propaganda. They nurture fringe elements in print, television and on the Internet from which they mine the raw lies and slander that gets molded, refined, and eventually presented on the mother ship, Fox News. One of those fringe sites is the Daily Caller (DC), which was founded by its Editor in Chief, Tucker Carlson. 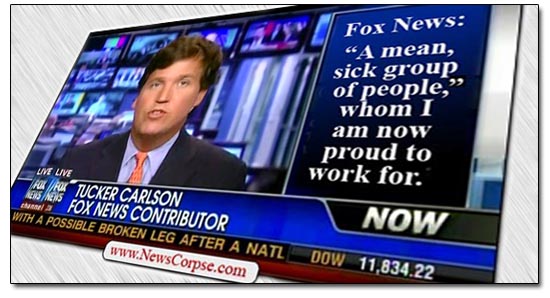 In order to be accepted into the family you must swear allegiance to the Fox Nation and its Divine Monarch, Rupert Murdoch. That mandate was articulated explicitly by Fox’s Grand Wizard, Roger Ailes, who decreed that there be no “shooting in the tent.” Unwavering loyalty is compulsory, and on Tuesday there was an example of what happens when that edict is breached.

In an article for the DC titled “Fox Makes It Easy for Amnesty,” Conservative blogger Mickey Kaus criticized Fox News for not being sufficiently anti-immigrant. Kaus accused Fox of deliberately soft-pedaling the issue and, by extension, supporting President Obama who he believes is a lawless tyrant whose executive actions violate the Constitution. Kaus went on to assert that Fox’s alleged retreat from anti-immigration reporting was “a dry run for how Murdoch’s network might ease the way for a legislative amnesty down the road.”

Apparently that kind of talk is verboten. When Carlson saw the article he abruptly deleted it. [It remains in cached form here] According To Kaus, Carlson said that “We can’t trash Fox on the site. I work there.” Whereupon Kaus offered his resignation.

Kaus is delusional if he believes that Fox News bailed on its anti-immigration agenda and particularly on its anti-Obama stance with regard to executive overreach. Fox News has maintained their “amnesty” hysteria as a staple of their Obama-hating editorial obsession. They routinely feature commentaries by anchors and guests who hammer the administration with some literally calling for Obama’s impeachment. Apparently that’s not enough for Kaus.

Nevertheless, right or wrong it was a mortal sin for Kaus to take Fox to task and Carlson couldn’t permit it to stand. The article was removed, Kaus was admonished, and subsequent to his resignation, Kaus gave this statement to Politico:

“It’s a larger problem on the right: Everybody is scared of Fox,” he said. “Fox is their route to a high-profile public image and in some cases stardom. Just to be on a Fox show is a big deal. And I think that’s a problem on the right, Fox’s monopoly on star-making power.”

On this Kaus could not be more correct. Fox News has become the single most important prerequisite for entry into the rightist Heaven. Every conservative must make the pilgrimage to Fox if they hope to be saved. And no one knows this better than Tucker Carlson.

Prior to his embrace by Fox News, Carlson’s career was a pitiful collection of failures. He had been canceled by PBS, CNN, and MSNBC. And if that wasn’t embarrassing enough, he was the first contestant voted off of Dancing with the Stars. He seemed to be a recidivist loser with no reasonable hope for redemption. He had even burned bridges with regard to Fox News when, after a childish prank (by both of them), he called Fox “a mean, sick group of people.”

Fortunately, For Carlson, Fox News has a policy of dredging the sewers of pseudo-journalism and rescuing the most offensive and desperate rejects, giving them a second chance at salvation. Of course that forgiveness comes at the cost of their soul. It rests on their willingness to supplicate themselves to their new savior.

So when Fox called, Carlson went crawling back with his tail between his legs and fully prepared to obey. That’s why Kaus was not permitted to find even the tiniest bit of fault with Fox News and their sanctified editorial scripture.

Carlson knows his place and did what was expected of an indentured servant to the Wingnut Overlord. By censoring Kaus, Carlson has insured that he can remain in the icy embrace of Fox News for another day. And, after all, that’s all that any of the ego-driven shills for the GOP (Greedy One Percent) really want. They are well aware that if they eagerly prostrate themselves to their Murdochian master, that Fox will provide. What a comforting notion for these otherwise worthless heathens.