After nineteen years of flogging the most partisan right-wing propaganda and serving as the PR division of the Republican Party, It is astonishing, and somewhat comical, that Fox News can still present itself as “fair and balanced.” That delusion requires a measure of either self-deception or rank dishonesty that defies comprehension. 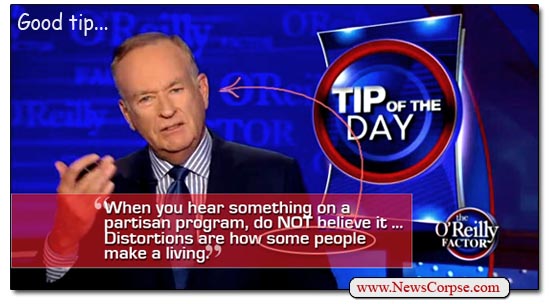 And yet, that is precisely the position taken by Fox’s Godfather of Gumption, Bill O’Reilly. On Thursday’s program O’Reilly butted heads gently with his frequent guest and sycophantic hanger-on, Bernie Goldberg, who tried meekly to assert the obvious.

Thereupon, O’Reilly set out to prove that he and his “flagship” show is a paragon of neutrality goodness. As evidence he bragged about featuring “unbiased” commentators like Charles Krauthammer and Brit Hume. Which is a little like saying that inviting David Duke to dinner proves you’re not a racist. O’Reilly goes on to insist that rabidly partisan Fox hacks like Megyn Kelly, Bret Baier, and Chris Wallace are ideological straight shooters. And while Goldberg agrees with him on every count, he still asks O’Reilly incredulously…

Well, except for all the times that Fox has simply declined to mention conservative screw-ups, scandals, and blatant lies. And when Fox can’t help but mention some right-wing fiasco, they devote most of their time and energy to defending the wingnut miscreants responsible for it.

A conveniently timed example of this came in a segment from Thursday’s Daily Show with Jon Stewart. Reporting on the hypocrisy of Fox News coverage of the Justice Department’s investigation of police conduct in Ferguson, Missouri, Stewart noticed Fox’s one-sided focus on the exoneration of officer Darren Wilson, while completely ignoring the DOJ’s conclusions that the Ferguson PD engaged in routine discrimination and racist behavior. Stewart compared Fox’s response to the DOJ report with their non-response to a Republican House Intelligence Committee’s report debunking the lies that Fox had been telling about Benghazi for years. Summing up he succinctly articulated…

You’ll be waiting a long time for Fox News to apologize for getting virtually everything wrong about Benghazi. Apologies are a foreign concept to Fox. And O’Reilly is the poster boy for arrogant refusals to take responsibility for mistakes, deceptions, and outright lies. The recent unveiling of a career-long pathology of dishonesty and personal glorification, complete with documentary evidence of his deliberate falsehoods, has failed to produce the slightest bit of contrition or shame, much less an apology. To the contrary, O’Reilly’s response has been to lash out by insulting and literally threatening his critics. And when he isn’t on the attack, he resorts to distractions such as this week’s anti-Semitic segment calling Jewish philanthropist George Soros a “Puppet Master” who controls governments and banks and other institutional levers of power.

O’Reilly’s anger, divisiveness, and evasion of accountability are emblematic of the Fox mindset. And his inability to admit the starkly conservative biases of Fox indicates an acute case of denial. Anyone who continues to believe that Fox News is a fair arbiter of information needs to adjust their meds. And that includes O’Reilly.