The upcoming Republican presidential primaries promise to be an entertainment extravaganza for America in general and for Democrats in particular. The warring factions are preparing for a bloody conflagration as the radical Tea Party aims to hammer the hapless establishment for being ineffective cowards, and the establishment plots to cast the Tea Partiers as unrealistic losers. However, the fracturing coalition of wingnuts that comprise the GOP (Greedy One Percent) is already beginning to fray around the edges even before the campaign season has officially commenced.

This week’s preliminaries were initiated by self-described rodeo clown and crazy person, Glenn Beck, who came out swinging with a rant about how awful the Republican Party is. For most Americans Beck was just stating the obvious. And his declaration that he was “done with it” was not even new for him. Nevertheless, he reiterated that…

Well, that might not go down well with Ted Cruz, Marco Rubio, Scott Walker, Ben Carson, and all the other Republicans currently mulling a run for the Republican nomination, rather than running from it. And Mike Lee, Tom Cotton, Louie Gohmert, Steve King, and other GOP members of Congress may likewise not appreciate it. These all happen to be people for whom Beck has deep affection, but from whom he is now recommending running.

However, the main event will be the reaction from veteran GOP hack, and Bush’s brain, Karl Rove. Turdblosson appeared on Fox News (where else) to counter Beck’s uppercut, and he brought his whiteboard with him. Rove deflected Beck’s broadside as being “old news” and noted that he had never donated to the GOP in the first place. Rove continued by denigrating Cruz, a Beck favorite, as a hypocrite. In the end, Rove surmised that Beck’s renouncement might hurt a bit, but would not have a lasting impact.

But this aint over. Beck responded to Rove’s defense of the establishment with a long, rambling Facebook post that filled in all of the gaps Beck left in his earlier tirade. He explicitly cited what he regarded as the failures of a hopelessly ineffectual GOP. He specifically mentioned the deficit, ObamaCare, immigration, and the insane conspiracy theory about Grover Norquist. Also on his list of particulars are Network Neutrality, Common Core, the IRS, Cass Sunstein, and of course, Benghazi. In other words, the usual bullshit that wingnuts have been rattling their cages over for years. But the knockout punch has to be this stinger:

“You guys have the spine of a worm, the ethics of whores, and the integrity of pirates. (My apologies to worms, whores and pirates).” 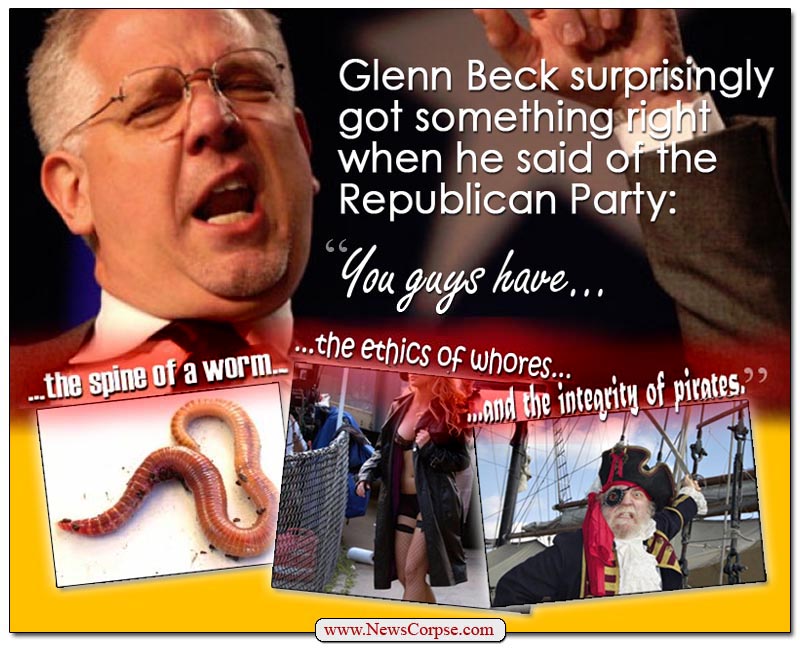 Ouch! That’s gonna leave a mark. Although I can’t say that I disagree with him. But how will Rove ever recover from that? It’s hard to predict the outcome of this first round battle when both parties are such pitiful has beens. Nobody really cares what either of them have to say, except for their own glassy-eyed disciples. But it is a fun opener that portends even greater amusement as the real candidates bounce into the ring. So settle back and be sure to have plenty of refreshments handy. This may be a good time to buy stock in Orville Redenbacher.

2 thoughts on “Get Ready To RUMBLE: Glenn Beck And Karl Rove Throwdown Over The GOP”