Following President Obama’s reelection victory over Mitt Romney in 2012, the Fox News contributor who missed the call by the widest margin was the notorious Dick Morris. In a remarkably wild prediction, Morris was adamant that Romney would not only beat Obama, but would win by a landslide. When that prediction proved to be as absurd as predicting that Sarah Palin would be invited to join Mensa, Fox News declined to renew Morris’ contract, otherwise known as firing him. 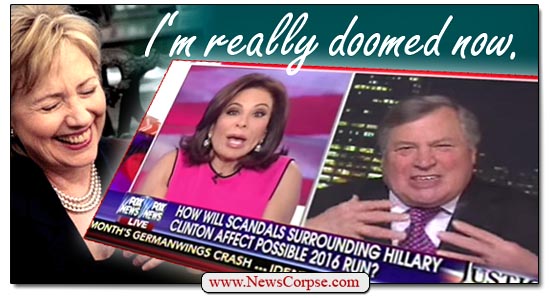 This Easter weekend, when rising from the dead was on every good Fox viewer’s mind, Morris himself emerged from the tomb of former Foxies to tell host Jeanine Pirro exactly what her audience was yearning to hear.

Morris: If [Hillary Clinton] goes down over this [email] scandal, which I think she will, it’ll cause enormous losses in 2016. Not just the presidency but mammoth losses in Congress.

So according to Morris, Clinton will not make it past the Democratic primary, and if she does, she will suffer a humiliating loss and take the whole party down with her. In fact, in response to a question from Pirro, Morris was unable to speculate on any advice he might give her to get out of the “mess” she’s in because it’s “way beyond” that and it is now a “disaster.”

Apparently Morris is unaware that Clinton is beating every Republican she’s matched against in most polling. But the fact that Morris is stupendously oblivious to reality isn’t really what makes this significant. After all, Morris is the same pundit who wrote the book “Condi vs. Hillary,” which contained his astute prediction for the 2008 presidential race in the title. That didn’t exactly pan out for him, did it? From the introduction to the book:

{T]here is no doubt that Hillary Clinton is on a virtually uncontested trajectory to win the Democratic nomination and, very likely, the 2008 presidential election. She has no serious opposition in her party […]

The stakes are high. In 2008, no ordinary white male Republican candidate will do. Forget Bill Frist, George Allen, and George Pataki. Hillary would easily beat any of them. Rudy Giuliani and John McCain? Either of them could probably win, but neither will ever be nominated by the Republican Party.

So Morris got the Democratic nominee wrong, despite his conviction that there was “no doubt.” He also got the Republican nominee wrong. And the Republican who Morris said could not be nominated, but would win if he were, was nominated but actually lost. Is there any way he could have been more wrong?

What’s truly troubling about this new boneheaded commentary from Morris is that he’s back on Fox News to deliver it. Fox is so desperate for frothing, rabid Clinton hating that they have dug up the corpse of Dick Morris to make his famously idiotic prognostications that have no hope of ever coming to pass. That tells us something about the direction that Fox is moving in as the 2016 campaign season begins to heat up.

They are going full-bore into manic, psycho, loony, hysteria mode. So be prepared for a display of batshittery that surpasses anything that we’ve seen before from the Romney campaign or even Sarah Palin. The wingnut parade is going to be marching even farther out on the ledge than ever before. And Fox News will be covering it all with the flashing graphics, clanging gongs, and blathering airheads that have become their trademark.