Not satisfied with having been convicted for unlawful activity in the office of a United States Senator, or losing $100,000 to a former ACORN employee he defamed, James O’Keefe has racked up a rap sheet that a Mafia boss would envy. 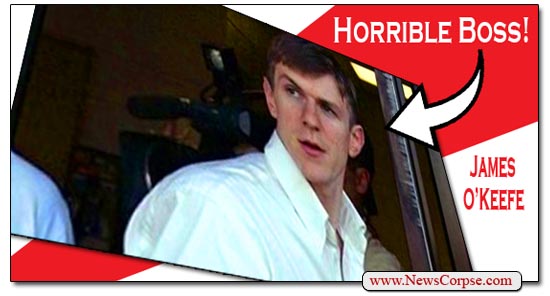 O’Keefe’s latest legal misadventure just ended with his meritless libel suit being thrown out of court by a federal judge who dismissed the action with prejudice (meaning that it could not be re-filed). The complaint was against the website Main Justice who published an article about O’Keefe’s prior legal exploits. The court ruled that the article by Main Justice was accurate and truthful and did not libel O’Keefe.

This is just the latest legal setback by a recidivist slandering weasel who pretends to be a journalist, but who actually uses deceitful methods to falsely malign his ideological enemies. His utter lack of principles has been recognized by numerous legitimate journalists and even by prosecutors in Texas (yes, TEXAS) who investigated one of his videos at the request of a local judge and concluded that it “was little more than a canard and political disinformation.”

Looking back on O’Keefe’s sorry resume of dishonest mudslinging, it became apparent that many of his legal adversaries sprung from his own poisoned well of associates. There was Nadia Naffe, who alleged that O’Keefe held her against her will in a barn and may have drugged her. And there was Daniel Franciso, the executive director of his Project Veritas organization, who sued him for wrongful termination. And there was Richard Valdes, another top staffer, who refused to strong-arm a volunteer into acting as an agent provocateur and inciting violence against police officers. He was also fired by O’Keefe and is considering legal action. And finally, there was Izzy Santa, one of his colleagues who blew the whistle on a perverse plot to attempt to seduce CNN reporter Abbie Boudreau on his “Love Boat.”

O’Keefe’s Project Veritas is a small operation, but has already accumulated four ex-associates who have alleged unethical or illegal practices by O’Keefe. That’s a pretty embarrassing record. But it is no more embarrassing than the stacks of videos he has produced that have been repudiated as lies and castigated for their routine use of deceptive editing and manipulation.

When viewed all together, it quickly becomes obvious that O’Keefe is running a hatchet job shop and that he is just as willing to screw over his employees as he is his video victims. For as long as he has been crawling along the floorboards of society, people in his crosshairs have had to be careful not to fall into one of traps. But now it is just as obvious that anyone considering working for him had better think at least twice before trusting this cretin.