If you aren’t doing anything this coming Friday, and you have an hour to devote to becoming more ignorant, Fox News is airing special report based on a book that makes wholly unsubstantiated allegations against Hillary Clinton. 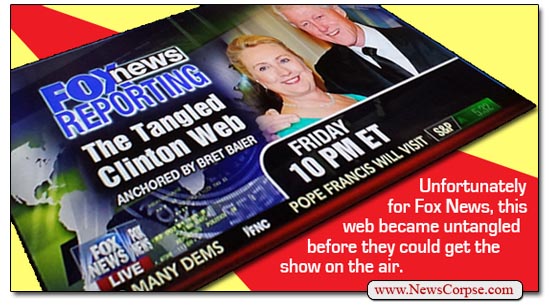 The book “Clinton Cash” has been getting a great deal of promotion from Fox News and other right-wing media outlets, although it won’t be released for another couple of weeks. The author, Peter Schweizer, is one of the most widely discredited writers working today. His past is replete with criticisms from across the political spectrum and his books have been ridiculed for sloppy investigations and sources who don’t exist.

Schweizer is now the president of the Government Accountability Institute, an organization that is bankrolled by the Koch brothers and was founded by the head of Breitbart News. The GAI has previously embarrassed itself by publishing studies that brazenly misrepresented (or invented) the facts related to their bogus reporting. News Corpse covered one such incident involving an alleged foreign fundraising scandal that supposedly “rocked” the Obama reelection campaign. However, the study didn’t cite a single example of a foreign donation and the authors admitted to Fox’s Steve Doocy that there is no such evidence. Likewise, another GAI study claimed that Obama took more vacation days than average private sector workers. Once again, the study totally distorted the data that actually showed that Obama took far fewer days off.

Now Schweizer has a new book that has been been promoted as a devastating blow to Clinton’s campaign. Rand Paul teased the media by saying that he has “been briefed by Peter Schweizer on this book, and the facts are going to be alarming.” Sean Hannity unleashed a frantic rant saying that “These newest allegations…have the potential in the end to derail this presidential campaign.” These are just two examples of a flood of headlines and hyperbole that say much the thing, that Hillary Clinton’s presidential aspirations will be over just as soon as the book hits the shelves.

There is only one problem with their prognostications of doom. The book is a fraud that proves nothing. The early reports from people who have actually read it indicate that the author fails to connect any of the dots that the wingnut media is hyping. And according to ThinkProgress, who got a copy of the book, even Schweizer admits that he has no proof of anything untoward:

“Schweizer explains he cannot prove the allegations, leaving that up to investigative journalists and possibly law enforcement. ‘Short of someone involved coming forward to give sworn testimony, we don’t know what might or might not have been said in private conversations, the exact nature of the transition, or why people in power make the decision they do,’ he writes. Later, he concludes, ‘We cannot ultimately know what goes on in their minds and ultimately provide the links between the money they took and the benefits that subsequently accrued to themselves, their friends, and their associates.'”

In other words, he’s got nothing but wild accusations and speculation. But it gets even worse. ThinkProgress also found a segment in the book where Schweizer cites a press release as back-up for his charges. Unfortunately for Schweizer, the press release was revealed to be fake back in 2013, a fact that he had plenty of time to discover and avoid putting forth as corroborating evidence.

This is typical of the sloppiness that has dogged his career. The rebuttals to the book on the basis of his dishonesty and lack of professional ethics have already begun to worry his defenders at Fox News. They are resorting to propping him up by asserting that attacks on his credibility are rooted in partisanship, rather than the abundant evidence of his hackery. Fox News anchor Harris Faulkner rushed to his aid saying that “You talk about tearing Schweizer down because he was formerly with Republicans. What about George Stephanopoulos?”

Isn’t it cute how Faulkner tries to slip in the suggestion that Schweizer was “formerly” with Republicans, as if he is no longer a committed right-wing activist, as evidenced by his leading the Koch-funded GAI? But more to the point, what does Stephanopoulos have to do with this? He hasn’t written a book filled with lies aimed at smearing a Republican presidential candidate. No doubt Clinton backers are just as partisan as any other politicos, but the problem with Schweizer isn’t his party affiliation, it’s his credibility and integrity.

Which brings us back to the special on tap for Friday. Fox News will broadcast an hour long program titled “The Tangled Clinton Web” that is anchored by Bret Baier and based on Schweizer’s book. However, the book has already been revealed to be a fraud whose author admits that he doesn’t have the goods on Clinton and whose book is rife with errors and uses hoax press releases as proof. And there are still a couple of days before the special airs for more revelations to be uncovered.

This Fox News special is tainted before it has even aired. Will they include any of the info that has come out about the book in their broadcast? Will they try at all to be fair and balanced? Not likely, given the track record for Fox. And even though they’ve got plenty of lead time to include the truth, Fox has demonstrated that truth is not a part of their criteria for reporting what they mistakenly call news.