Last week the nation marveled to the spectacle of Jeb Bush fumbling what must have been the most highly anticipated question that he could possibly have been asked in his nascent campaign for the Republican nomination for president of the United States of America: Knowing what is known now, would you have authorized an invasion of Iraq?

Bush responded that he thought his brother George had made the correct decision given the available intelligence. That, of course, was not the question he was asked. So in the days following the flub, Bush claimed to have misheard the question, but still gave multiple different answers before finally admitting that he would not have ordered an invasion if he knew what he knows now. 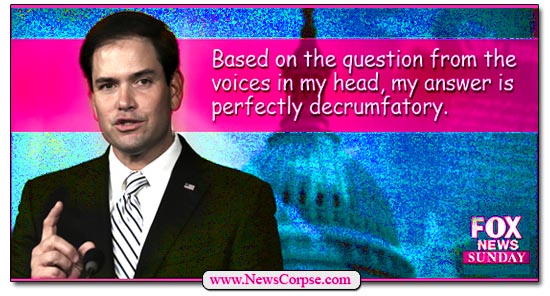 For Marco Rubio, that ought to have been an object lesson in tackling this otherwise softball question. But for some reason, the freshman senator managed to do in three minutes what it took Bush five days to do: make an utter ass of himself. In an exchange on the decidedly friendly territory of Fox News Sunday (video below), Rubio engaged in a painfully comical routine with host Chris Wallace wherein he repeatedly failed to grasp the nature of the question he was being asked. Here is just a portion of that train wreck:

Well, that clears that up. Is Rubio really that dense or was he he just desperate to avoid criticizing George Bush? Wallace gave him ample opportunity to craft a response that included support for Bush as well as the obvious acknowledgement that no president should invade a country without airtight justification. Rubio kept trying to answer a question that Wallace had not asked, despite Wallace repeatedly restating his actual question. And it isn’t as if this were a surprise, gotcha question (like what magazines do read read?). It is a question that has been in the news for a week.

Why is it so hard for Republicans to concede that wars should not be started unless there are provable threats to our national interest? This sort of obtuse defiance of common sense is what makes people convinced that the GOP is a party of war mongers who will launch into battle on the slightest whim. It reinforces the widespread impression that they are lackeys to the defense industry and others who profit off of war, including those whose profits are political rather than financial.

Elsewhere in the interview, Wallace raised Rubio’s campaign theme of “21st century ideas” and asked him to talk about them. That would ordinarily be a perfect opportunity to drop a campaign ad into an interview. However, Rubio dodged any reference to new ideas saying only that “the balance of power in the world has shifted” because of “autocratic governments in Russia and China” and “rogue states like North Korea and Iran.” Right, because none of them were around in the 20th century.

When Wallace pressed him to reveal his actual new ideas to address those allegedly new problems, Rubio eventually complied saying that “we need to cut [tax] rates” and improve the education system. Those, of course, address only domestic problems that have no bearing on the foreign affairs he had just raised. Not to mention that neither of those “ideas” can be coherently described as “new.”

If this is a taste of what Rubio’s campaign will be offering in the coming months, it can be safely assumed that he isn’t going far. But then Bush has already flubbed some of the same questions and the rest of the GOP pack has even less foreign policy experience than these two flounders.

This election cycle promises to be an entertaining romp with plenty of twists and turns. It should be serialized as a reality TV show a la The Amazing (Presidential) Race. I, for one, can’t wait for the debates to see who is voted out of the clown car next.