The conservative media circus is furiously banging their drums to chastise George Stephanopoulos, host of ABC’s Good Morning America and This Week, for his failure to disclose a donation to the Clinton Foundation. This oversight is being portrayed as an unforgivable offense of partisan bias. As with any matter that can be hyper-dramatized by zealous punditry, Fox News took the lead in running Stephanopoulos through the metaphorical grinder. 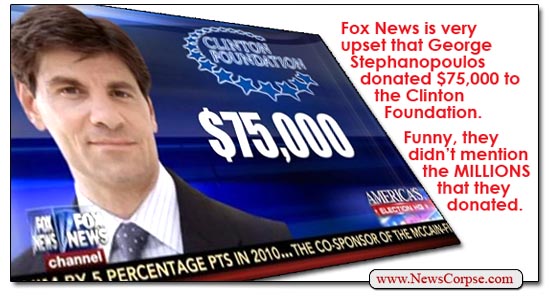 A couple of notes need to be raised in order to fairly assess this situation. First of all, Stephanopoulos donated to a charitable organization, not a political campaign. Thus, it cannot really be regarded as partisan in that the Clinton Foundation does not engage in any political activities. Its mission is purely philanthropic and no fair observer has ever alleged any ideological leanings. Furthermore, unlike a corporate donor or a foreign entity, there isn’t any conceivable benefit that Stephanopoulos might have been seeking in exchange for a donation. Even his critics do not allege that his motives were anything but altruistic.

That said, there are problems with his failure to disclose that impact his reporting when the subject is the Foundation itself. For instance, Stephanopoulos recently interviewed the author of “Clinton Cash,” a book that alleges improprieties on the part of Hillary Clinton in connection to donations to the Foundation. The fact that the book was filled with factual errors and failed to prove its premise does not excuse Stephanopoulos from an ethical duty to reveal that he was also a donor.

Taken in its entirety, this scandalette hardly seems to approach the degree of significance that is being assigned to it by Fox News and other conservative media. There was no effort to extract any personal gain and the ethical lapse did not result in any reportorial distortion. But that hasn’t stopped right-wing muckrakers from attempting to whip it up into a full-blown catastrophe for Stephanopoulos. He has been maligned as hopelessly biased and there have been calls for him to resign or be fired. Fox’s Howard Kurtz described the affair as…

“…such a bombshell that George Stephanopoulos has now had to withdraw as ABC’s moderator in the Republican presidential debate next year.”

What makes the debate moderation move somewhat comical is that last November the chairman of the Republican Party, Reince Priebus, ruled out anyone that he regarded as being unfriendly to the Party’s interests.

Priebus: [the] thing that is ridiculous is allowing moderators, who are not serving the best interests of the candidate and the party, to actually be the people to be deposing our people. And I think that’s totally wrong.

Priebus reinforced that edict yesterday saying that “I’ve been very public about this. George Stephanopoulos was never going to moderate a Republican debate anyway.” Somewhere Priebus got the impression that debate moderators are supposed to serve the interests of the candidates. Certainly the interest of the voters never entered into it. And the last thing that the GOP wants is a debate that is truly spirited and informative. They are looking for something more on the order of an infomercial.

Amidst this tumultuous uproar over the fate of Stephanopoulos and his relatively modest $75,000 gift, what has gone unmentioned is that he is not alone in making donations to the Clinton Foundation. In fact, Fox News has been even more generous than Stephanopoulos. Rupert Murdoch’s son James, the COO of 21st Century Fox (parent company of Fox News), made a donation in the range of $1,000,000-$5,000,000. The News Corporation Foundation contributed between $500,000-$1,000,000. Fox regular Donald Trump forked over between $100,000-$250,000.

So the question is: How can Fox News criticize George Stephanopoulos for his undisclosed donations to the Clinton Foundation, when they have made far bigger donations without disclosing them? What’s more, the donations from the Fox media empire can be regarded as possible bribes since, unlike Stephanopoulos, they have pending business before the government and its regulatory agencies. If Fox News wants to pretend to be “fair and balanced” they need to immediately come clean. And if Stephanopoulos is denied the opportunity to moderate any GOP debates, then Fox News should be prohibited from airing them.

Don’t hold your breath waiting for Fox to act ethically in this matter. They will neither remove themselves from the debate schedule, nor cease their attacks on Stephanopoulos. That’s just the way Fox does business and it will continue despite the obvious hypocrisy and lack of journalistic principle.

17 thoughts on “Stephanopoulos Isn’t The Only Media Donor To The Clinton Foundation (Is He, Fox News?)”