A few weeks ago a well known Islamophobe and professional instigator, Pamela Geller, held what she pretended was a contest to “Draw the Prophet Muhammad.” In reality the affair had nothing to do with art or free expression, but was a deliberate attempt to incite violence.

Geller’s hate-fest was praised as a courageous expression of liberty by sympathetic bigots at Fox News. They regarded her repugnant message as patriotic and celebrated the death of the two idiots that Geller was successful in provoking into senseless violence. But if you want to know what the same Fox News blowhards who revere Geller really think about free speech, just keep watching and they will reveal their true disgust for the First Amendment when it protects speech that they don’t like. 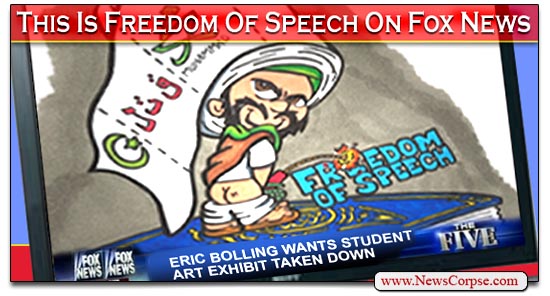 Last week Eric Bolling delivered a commentary about an art exhibit by students at a New Jersey high school. The exhibit was called “Law Enforcement – Police Brutality.” It was a subject chosen by the students and was open to, and included, opinions from all sides of the debate. Bolling, of course, focused solely on the work that was critical of the police, and he was not shy about expressing his desire for censorship.

Bolling: OK, I get the idea of free speech but … hey, teachers at Westfield would you put up an art exhibit showing teachers abusing students? I don’t think you’d do it. Nor should you have done this. I’d like to see that thing taken down.

Judging by this comment it is not particularly clear that Bolling really does “get the idea of free speech.” These students have every right to express their own opinions of significant current events that affect their communities. Suppressing the artwork they produce is a clear breach of those rights. But hypocrites like Bolling continue to expose themselves as having variable principles that permit freedom only to those with whom they agree. This is illustrated best by what Bolling himself said a couple of weeks prior in defense of Geller and her hate exhibit.

Bolling: Free speech is protected no matter how inciting it may be. We’re becoming too politically correct. We worry that offending Muslims somehow overrides our won Constitutional rights.

It should surprise no one that Bolling never suggested that Geller’s exhibit should be “taken down,” nor that he never stood up for the students’ free speech “no matter how inciting it may be.” To Bolling and his Fox News cohorts, Geller’s anti-Muslim bigotry makes her a standard bearer of American virtue, but the students’ concerns about abuse of power by law enforcement makes them snotty little delinquents who should be neither seen nor heard.

On a side note, why is Fox News so obsessed with demeaning high school students? Check out this previous attack on students in Vermont after they defended their state from disparaging remarks by a Bill O’Reilly producer.

Icing on the flake: The following day, Bolling responded to criticism he received for his overt hypocrisy. In his whiny, self-defense he insisted that he is a stalwart proponent of free speech and all that he meant to convey was that he also had the right to say that he didn’t approve of the student art show. However, there a couple problems with that “clarification.” First, he didn’t say that he didn’t approve, he said that he would like to see it taken down. Second, he never acknowledged that critics of Geller’s phony exhibit also have a right to disapprove. He still regards them as anti-free speech, once again proving that his rights are legitimate and everyone else should shut up.

3 thoughts on “Free Speech At Fox News: Offensive To Muslims OK – Critical Of Police No Way”