Well, there can be no more doubt about. Donald Trump is the most pathetic ignoramus in the Republican Presidential Clown Car Primary. If it wasn’t bad enough that his laughably embarrassing announcement speech was riddled with falsehoods, or he claims to have a foolproof plan that will “bring ISIS to the table or, beyond that, defeat ISIS very quickly,” but he refuses to say what it is, he is now launching a trade war against Latinos, the fastest growing demographic in the American electorate. 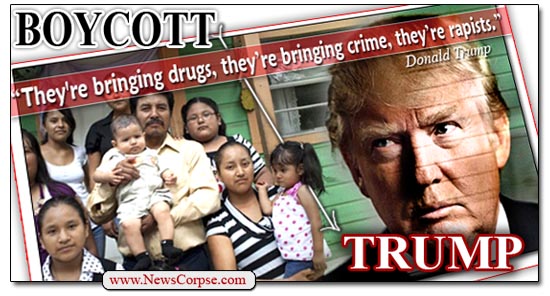 The war was instigated after Trump insulted Mexican immigrants by saying that “they’re bringing drugs, they’re bringing crime, they’re rapists. And some, I assume, are good people.” And although he probably thinks that he was being complimentary with his appended assumption, it certainly wasn’t taken that way by those he was insulting. Subsequent to his remarks, the Spanish-language TV network, Univision, announced that they would no longer partner with Trump on his Miss USA Pageant, and would cease all business relationships with Trump.

Univision was not alone in condemning Trump. Many other Latino celebrities, executives, and politicians cited Trump’s vile comments and pledged to avoid associations with him. In one instance that crossed the line of civility, a Univision exec retweeted a photo juxtaposing Trump with Charleston killer, Dylann Roof. The Tweet was quickly deleted despite the obvious similarities in appearance and expression. But not before the poor attempt at humor pierced The Donald’s thin skin.

The war, now raging, saw Trump escalate to threats of lawsuits against Univision. But even more frightening, Trump declared that Univision execs would not be permitted on Trump’s golf courses. That’s a pleasant bit of imagery. Trump is now running restricted country clubs that prohibit Latinos. Somehow, I don’t think that any of them are losing any sleep over not being able to play on Trump’s lawn.

Perhaps the most absurd volley in this battle is Trump’s attempt to get the Republican National Committee to cancel the GOP presidential primary debate on Univision. It’s absurdity rests on the fact that Univision is not scheduled to be hosting a debate, and was explicitly snubbed when the RNC put together their debate plans. RNC Chair Reince Priebus called Univision “a long-term enemy of the Republican Party.” Instead, the RNC went with the number two Spanish-language network, Telemundo, which has half the viewers of Univision and is owned by the GOP-friendly (?) NBC network. So Trump’s temper tantrum to terminate Univision is just another figment of his dementia.

Not surprisingly, Trump has gotten some support from the Wingnut Echo Chamber. One of those digging deep to defend him, Breitbart News, leaped face first into the dump Univision shallow end. An article by their editor, John Nolte, began by agreeing with Trump’s insult to Mexicans saying that “What Donald Trump said about illegal aliens and rape and crime was not untrue.” So Nolte is also a racist who believes that there are eleven million Mexican criminals and rapists in America. As for the Univision debate, Nolte agrees that the broadcast should be removed from the schedule that it already isn’t on. But his brilliant alternative is to have the fictional debate moved to Fox’s Spanish-language network, MundoFox. Nolte apparently thinks that the MundoFox audience of about 170,000 is a better platform for the GOP Comedy Hour than Univision’s 2.1 million (more than ten times greater).

With Trump banishing Univision from his country clubs and trying to get his party to nix a debate that doesn’t exist, he is begging for retaliation. This is something that he would surely regret if Latinos en masse responded by ditching the Trump brand. They could all boycott his golf courses, and his hotels as well. They could refuse to buy his ties, cologne, or other cheesy consumer goods. That includes the Trump line at Macy’s (who should also feel the heat of partnering with a racist). They could shun his real estate properties. And this economic backlash could extend to anyone who is repulsed by Trump’s overt racism. Asians, Saudis, Europeans, and American consumers can and should withhold patronage from him on the basis of his prejudice. And if he thinks he can prevail by blackballing all of them from his golf course, then his reality blind-spot is even bigger than his ego (and that may not be possible according to the laws of physics).

[Update 6/29/15: NBC has announced that they have cut all business ties with Trump. This includes the Apprentice programs and the pageant broadcasts. And while Univision is not a debate host, NBC’s Telumundo is. Will Trump now lobby the RNC to cancel that debate? Stay tuned]

Donald has always been a fraud who is more adept at promoting himself than any business venture. For a sampling of his tendency to fail, take a look at these 12 Donald Trump businesses that no longer exist. There is a reason he embarrasses himself by hosting a TV game show. Can you think of any other billionaire who has the time to do that? Obviously he needs the money. He is no more a businessman than Kim Kardashian.

What’s more, Trump is a way too obnoxious to get anywhere in politics. It is simply idiotic to say that Mexico “is not out friend,” when they are one of America’s biggest trading partners (second biggest market for exports and third biggest for imports).

The fact that he suffers from Doofus Tourettes Syndrome doesn’t help either. How else do you explain his birtherism, or his recent declarations that “America is a hell hole,” and that “the American dream is dead?” These are not the bumper-stickers of a winner. But they do define the cretinous, narcissistic, anti-personality of Donald Trump. And Democrats couldn’t be more thrilled that he is among those who want to be the banner carriers for the Republican Party in 2016.

26 thoughts on “Boycott Trump: The Donald Declares A War On Latinos That He Can’t Possibly Win”