The Supreme Court ruling that same-sex marriage must be recognized as legal in all fifty states has set off a right-wing, evangelical hysteria complete with warnings of civil war, natural disasters, and a general descent into the End Times. Anti-gay extremists have declared what amounts to a Teabagger Apocalypse. 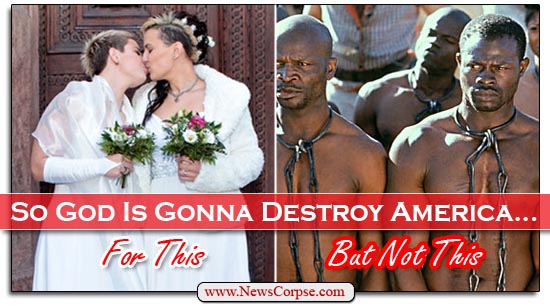 Republican presidential candidates are vowing to ignore the Court’s ruling. They insist that it is unconstitutional, proving that they have no idea what “constitutional” means. They continue to press their religious argument that the United States should adhere to the principles of faith that they hold, rather than honoring America’s religious freedom. They are convinced that this decision will result in their arrest and incarceration, which the decision explicitly forbids.

Christianist activists go even further to assert that America has now gone past the point of no return. They say that God will smite our nation and its people for permitting the freedom to love one another in the way that nature made them. They believe that Christians will be subject to a horror worse than the Holocaust.

The question that none of them can answer is: Why is God so upset about marriage equality when he seems to have let other atrocities go by unpunished? If God were going to destroy America why didn’t he do it when we enslaved, brutalized, and murdered thousands of his children shipped over from Africa? Why didn’t he smite our young nation as it marched westward slaughtering the native inhabitants along the way? Why didn’t God get mad when we murdered hundreds of thousands of Japanese civilians with nuclear bombs? Even from the Christianist perspective, how could God let America survive after legalizing abortion, which they believe is child murder? Apparently their God is tolerant of dead babies, but the thought of two consenting adults committing themselves to one another for life is deserving of total annihilation. (Or maybe God just has a more rational view with regard to when life begins).

In addition, God has also given immunity to Germany, which continues to thrive despite their abhorrent past; and Russia, the nation led by Stalin whose regime killed millions; and Mao’s China. And today he lets ISIS march through the Middle East leaving untold corpses and misery it its path. If God is judging us humans, and punishing us when we do wrong, what the hell is he waiting for?

The Christian extremists can’t answer that question. They can’t explain why God is itching to turn America to dust, but doesn’t seem to care much about Syria. They just continue to spew their foreboding messages of doom based on nothing but their imaginary fears and whatever they believe will fill the collection plate. That’s why they are now settling on marriage equality as history’s greatest abomination when there is no logic or reason to support such a claim.

In the conservative media there is a rush to idiocy, as Fox News wonders whether people will now be allowed to marry in groups, or to marry their pets, or to engage in pedophilia or incest. Glenn Beck is worried that this decision will result in him being thrown off of radio by Feds who he thinks can now regulate speech. Others vow to defy the law and, if necessary, resort to revolution.

Reminder: We’re talking about the legal status of a state of cohabitation, not killing babies, gassing Jews, or owning human beings. What kind of God do these people believe in who regards the definition of marriage as worthy of eternal damnation, but not those other atrocities? And what are they so worried about anyway? Isn’t Armageddon the final stage of man’s tribulations on Earth, after which the righteous rise to Heaven to sit at God’s side in paradise for eternity? Don’t they want that to happen, the sooner the better?

Given the absurdity of their thought processes, you have to wonder why anyone is taking them seriously. They can’t justify their outrage. They can’t even make sense of their own beliefs. If there is a judgmental God who values intelligence and reason, then the human race may actually have something to worry about.

[Addendum:] Much of the discourse that has developed in comments is focused on the question of whether the Bible or Jesus condemns, or even mentions homosexuality. That’s an interesting question, but it is not the one posed in this article. Near the beginning of the article the question is asked: “Why is God so upset about marriage equality when he seems to have let other atrocities go by unpunished?” And none of those posting their interpretations of scripture regarding the Bible’s stance on being gay answers that. Even if we were to accept the position that being gay is a sin, it still doesn’t explain why God would destroy America and its 360 million residents because a law honoring religious freedom (which is a founding principle of the country) is upheld by the high court to protect a minority of the population, when far worse atrocities went unpunished. Clearly the ultra-pious among us are feverishly struggling to find an argument that makes them feel comfortable holding a position that is patently irrational, even if it’s an argument that has nothing to do with topic at hand.

82 thoughts on “God Didn’t Destroy America For Slavery. But Married Gays On ObamaCare?”