There must be something in the DNA of right-wingers that prevents them from grasping simple truths and retaining them for periods longer than a Vine video. Case in point: Conservatives who for years have been suckling on the moronic accusations that President Obama is not legally qualified to serve because, they say, he was born in Kenya, have also disseminated a related bit of idiocy that Hillary Clinton was the first Birther. Despite the easily obtainable facts that prove that Clinton was not in any way involved in birthing Birtherism, wingnuts cling fiercely to the lie in an attempt to divert attention from the fact that they have been fully immersed in this nonsense from the beginning. And it isn’t just some fringe characters who have this trouble differentiating fantasy from reality. 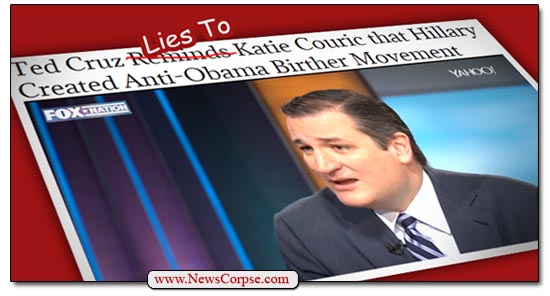 In an interview with Katie Couric on Yahoo News, Sen. Ted Cruz, a candidate for the Republican nomination for president, was asked about critics who raise his Canadian birth as an obstacle to his candidacy. Rather than simply repudiating them as idiots who don’t understand the Constitution, he veered from Couric’s question to this wholly unrelated and irrelevant drivel:

“The whole birther thing was started by the Hillary Clinton campaign in 2008 against Barack Obama.”

If you think that a sitting U.S. senator and aspiring president should know better than to spew demonstrably false information like that, then you don’t know Ted Cruz (or most of the GOP). This charge against the Clinton campaign has been around for seven years now. And some proponents of the lie attribute the meme to Clinton herself (see the headline from Fox Nation above). However, a little research shows that the roots of Birtherism lie with an extremist group of hard-core Clinton supporters who were not affiliated with the campaign. As revealed by Daily Beast editor John Avlon:

“[T]he Birther conspiracy theory was first concocted by renegade members of the original Obama haters, Party Unity My Ass, known more commonly by their acronym, the PUMAs. They were a splinter group of hard-core Hillary Clinton supporters.”

The theme was then taken up by Philip Berg, a 9/11 Truther who filed the first Birther lawsuit. He also had no connection to Clinton or her campaign. Thereafter, it spiraled out of control online and in emails. And all the while it was Republicans furthering the fallacy. Many of of them were prominent figures in the party, notably another current candidate for the GOP nomination, Donald Trump. [Fun Fact: Cruz is, so far, the only Republican candidate who is defending Trump’s repulsive and bigoted comments about immigrants for which Cruz doesn’t think Trump has any need to apologize]

It is significant that Cruz employed this dodge to answer a question that had nothing to do with Hillary Clinton. He wants to duck allegations by the lunatics questioning his own national origin without calling them lunatics and alienating an important GOP constituency who still believe that Obama is a foreigner unlawfully squatting in the White House. This is how Republicans embrace ignorance and pass it along to their followers. And no one is a better representative of that mission than Ted Cruz.

3 thoughts on “To Kill A Meme: No Ted Cruz, Hillary Clinton Did Not Start The Birther BS”