FOR IMMEDIATE RELEASE: Sarasota, Florida, July 16, 2015. The Distinguished Union of National Clown Entertainers (DUNCE) has filed a complaint against the Republican Party (GOP) for defamation and the willful infliction of reputational disparagement. The complaint alleges that the GOP did intentionally engage in activities that brought unwarranted shame to distinguished practitioners of clowning and the variety arts, and they failed to refrain from such activities when alerted to their impending harm.

DUNCE is being represented by the firm of ICP & Associates in this matter, in the jurisdiction of the State of Florida. 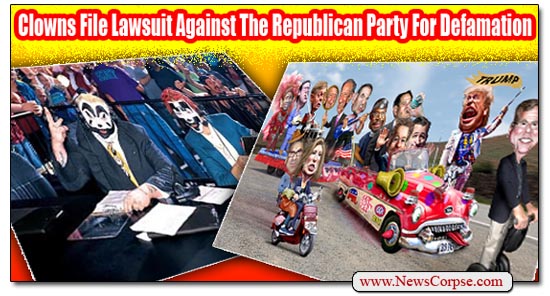 Members of DUNCE claim to have have been irreparably damaged professionally and personally as a result of the negligence and/or deliberate actions by the GOP. Specifically, by assembling a field of candidates with buffoonish characteristics that blatantly infringe on the intellectual property of the members of DUNCE, the GOP did appropriate the image and reputation of authentic clowns without authorization. They then proceeded to tarnish the good name of professional clowning by engaging in behaviors that were malicious and false.

Furthermore, the unsanctioned seizure of the recognized trademarks of the members of DUNCE has resulted in the public’s confusion of legitimate and honorable clowns with the political hackery of the GOP. Making ludicrous statements that compel laughter, stumbling over concepts that are commonly understood, juggling positions on issues, and throwing figurative pies in the faces of their political rivals, as well as their audience (i.e. voters), is unarguably an infringement of the rights of the clowning community, even though the GOP’s attempts are embarrassingly crude and amateurish.

In a statement to the media, DUNCE spokesman Flacko said that his members would no longer sit by and watch the GOP “drive their Clown Car over our rights.” “There is nothing more disheartening,” he said, “than watching someone like Donald Trump acting like a fool, and thereby taking the rubber chickens from mouths of our jesting brothers and sisters and their families.” Flacko also singled out Ted Cruz, whose candidacy has been aggressively farcical and even included a video “audition” for the animated TV program “The Simpsons.”

Other candidates committed their own brand of infringement with Chris Christie playing a loudmouth lout in a fat suit; Ben Carson doing his version of a Minstrel Show while calling ObamaCare “the worst thing since slavery;” Rick Perry donning “nutty professor” glasses; and Jeb Bush (who’s very name invokes clownishness) carrying on the tradition of his family’s “dimwitted yokel” act. In a recent performance he complained that “big-syllable words and lots of fancy conferences…creates a more dangerous world.” Indeed, that is funny material, but these people are not trained, experienced, or certified to practice professional clownery.

By acting like clowns, and appropriating the likeness of those who legitimately practice this age-old art, the GOP is doing demonstrable harm to an honored profession. They are creating confusion among the public. And they are damaging the profession and the people who have worked so hard to perfect it. It is on the basis of that harm that DUNCE is seeking compensation from the GOP collectively and the candidates individually.

“The reputation and honor of our members must be preserved,” said Flacko. “We have had no success getting the GOP to take responsibility prior to this, which is why this lawsuit became necessary. They have been openly belligerent and disrespectful up until now and, frankly, we don’t find it very funny.”