The manufactured pseudo-phenomenon of Donald Trump is running the media ragged as they try to explain (to themselves mostly) how such a preposterous caricature of a politician could be leading in the polls of a supposedly serious political party. The truth is that Trump isn’t leading anything. He is merely registering with the lunatic fringe demographic of the Republican Party which is as much support as he will ever get. As I wrote a few days ago in an article titled “New Poll Shows 18% Of Republicans Are Ignorant Dupes With Severe Mental Decay“ …

“The media is heralding Trump as the runaway GOP leader with his measly 18% of support. For perspective, note that Bernie Sanders, in his campaign against Hillary Clinton for the Democratic nomination, is pulling support from 19% of Democratic voters. Yet the press is dismissing him as trailing Clinton badly. So Sanders has more support among Democrats than Trump does among Republicans, but the schizophrenic media declares Sanders a loser and Trump a phenomenon.”

What the press isn’t telling you is that Trump’s 18% in the polls means that 82% are rejecting him. And if that weren’t bad enough, he has the highest unfavorable ratings of any candidate and the largest percentage of respondents who say they will “never” vote for him. However, for those who must have a deeper understanding of this temporary diversion from reality, there is an observation that was made by the philosopher Bertrand Russell that succinctly describes what we are witnessing: “Our great societies still tend to think that a stupid man is more likely to be honest than a clever man.” 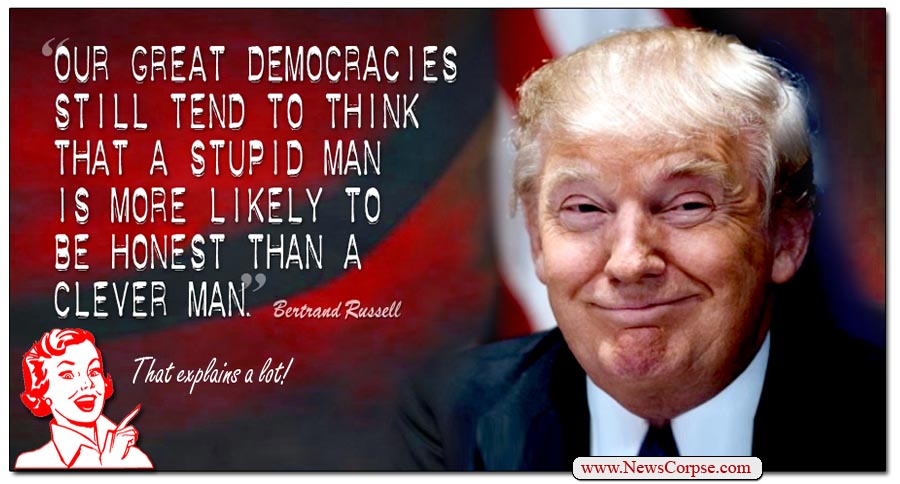 As evidence of the rampant stupidity being displayed by the Trump contingent of the GOP, look no further than the responses by members of a focus group held by John Heilemann of Bloomberg News. When asked to comment on what they liked about Trump they provided vagaries that were devoid of any substance that could be applied to an actual agenda. And what’s worse, they seem to think that being obnoxious is synonymous with being truthful. The group responded with statements like…

None of these people could articulate a single policy position or detailed proposal that Trump would implement were he elected. But then again, neither can Trump. His campaign platform consists mainly of insulting his rivals and spewing hollow cliches that mirror the hollow agenda of the Republican Party. For instance, he is virulently anti-immigrant. He advocates cutting taxes for the rich and regulations for big business. He wants boots on the ground in Iraq, Syria, and Afghanistan (and maybe Russia and China and North Korea). He is against reproductive rights and marriage equality. He doesn’t believe that Climate Change poses any imminent risks or is caused by human activity. He regards the Second Amendment as sacrosanct and opposes reforms like universal background checks. He has promised to repeal ObamaCare. And let’s not forget his leadership as America’s foremost Birther.

The people who support Trump are ideal reflections of the ignorance that permeates his campaign. Yet his supporters believe that his loutish and uncivilized behavior is an asset that connotes honesty and leadership. It’s the culmination of the moronic inquiry that keeps creeping up every election cycle asking “Who would you rather have a beer a with?” As if the souse at the end of the bar sucking on a Budweiser is the best qualified person to negotiate a nuclear arms treaty.

The only thing more revealing about the character of Trump than the idiocy of his supporters is their hostility. They like his roughness. They like it when he insults immigrants, or POWs, or other Republicans, or the media. And it is not unworthy of notice that among his most staunch supporters are America’s white supremacists, who regard him as the champion of disaffected whites. That’s how stupid the Trump constituency is. Trump is proving what Napoléon Bonaparte said two hundred years ago: “In politics, stupidity is not a handicap.” As an avid golfer, Trump should understand that his handicap is his base, because it tells us so much about him.

Addendum: If any further proof is needed that Trump’s supporters are imbeciles, Ted Nugent just said that Trump is “What America needs.” Case closed.

8 thoughts on “Revealed: Why Stupid Republicans Embrace The Stupidity Of Donald Trump”