When Jon Stewart announced a few months ago that he was leaving the The Daily Show it came as a shock to millions of Americans who couldn’t understand why he suddenly decided to give up the program that had brought him so much success and notoriety. After sixteen years of skewering the media and the public parasites who feed off of it, Stewart was inexplicably walking away while still at the height of his game.

Well, now it can be told. Thanks to intrepid reporting by the journalists at Fox News we can reveal that Jon Stewart is only resigning from The Daily Show so that he can take his place as Supreme Leader, a post for which he has been preparing for years. The evidence cited by Fox revolves around the disclosure that Stewart met secretly with President Obama, presumably to grease the wheels for his eventual ascendance to power. 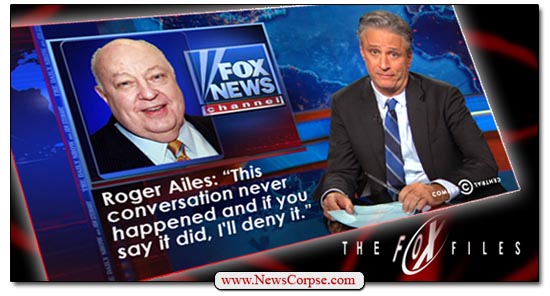 Never mind that the meetings at the White House were not actually secret at all. They were readily available in the public records that identify all White House visitors. And set aside that there were only two meetings in seven years, which hardly seems sufficient to have much impact on either Stewart or Obama. The discovery of these rendezvous can only be interpreted as ominous portents of what is to come. (See Stewart’s response to the “secret meeting” allegations in the video below)

Witness the editorial commentary used on Fox News to describe the affair. Anchor Bret Baier said that Stewart “has a close working relationship with the President. It turns out a lot closer than we thought.” Exactly. What could be closer than two meetings in seven years? They were practically joined at the hip.

Then there was anchor Jenna Lee who surmised that “Maybe that’s the secret of [Stewart’s] success. The White House has been writing his show.” An astute observation. Especially considering the wealth of talent and comedic brilliance for which political functionaries are known. Without that help Stewart would have been left to rely on mere comedy writers. Although it does make one wonder who was writing his material during the Bush administration.

Fox’s media analyst, Howard Kurtz, weighed in to reveal that “Last year the President chatted up Stewart hours before warning Russia about further military intervention in Ukraine. The next Daily Show mocked Vladimir Putin.” Obviously Stewart was carrying out orders from Chairman Obama. Why else would he do a segment on his daily news satire program that referenced something that was in the news that day?

Kurtz is among many Fox News commentators who frequently lambaste Stewart for allegedly being a fierce devotee of a far-left ideology. Bill O’Reilly called Stewart “a key component of left-wing television.” Megyn Kelly said that “he was not a force for good.” Greg Gutfeld called Stewart’s departure “a big loss for the simpering, left-wing media.” Eric Bolling reprimanded Stewart for “protecting the corrupt politicians.” And Sean Hannity took the high road by simply calling Stewart “a sanctimonious jackass..”

Fox News criticizing Stewart for being biased is something like Bill Cosby criticizing you for sexually assaulting drugged women. Fox News is the undisputed champion of bias in journalism. Their entire schedule is rife with right-wing propaganda. They are currently engaged in a blatant promotional campaign for Republican presidential candidates. Hannity’s show has so far given his full hour over to eleven of the GOP primary contenders (Bobby Jindal, Rick Santorum, Marco Rubio, Rick Perry, Jeb Bush, Donald Trump, Carly Fiorina, Chris Christie, John Kasich, Ted Cruz, and Rand Paul). Even the daytime “news” portion of Fox’s schedule hosted five GOP candidates for the full hour of Outnumbered (Jindal, Santorum, Rubio, Mike Huckabee, and Lindsey Graham).

To reiterate, these are not candidate interview segments. They are gifts of the entire hour of the program which the candidates don’t have to declare on their financial disclosure forms. And when Fox isn’t donating free airtime to Republicans they are bashing Hillary Clinton for anything from her email etiquette to rope lines for reporters, and always Benghazi.

The relentless bashing of Stewart is all the more absurd in light of the fact that when it suits Fox they will hail him for attacking liberals and/or Obama. As documented by News Corpse, Fox has published dozens of articles heaping praise on Stewart for either “destroying, tearing apart, eviscerating, or grilling” Obama and other liberals (see this list here). And if that weren’t enough, they also highlighted the many times Stewart “mocked, roasted, savaged, scorched, ridiculed, and obliterated” the President and his lefty allies (see this list here).

Now that the secret meetings have been revealed, all of the anti-liberal material Stewart did can be seen as sly attempts to throw everyone off the trail of his otherwise flagrant socialistic allegiances. Even the actual secret meeting Stewart held with a powerful media czar takes on new meaning. As Stewart notes in the video below, his meetings with Obama were not really secret, but his meeting with Fox News CEO Roger Ailes ended with him being told that “This conversation never happened and if you say it did, I’ll deny it.” It’s nice of Ailes to admit that he is not above lying.

Next week will be the last for Jon Stewart on The Daily Show. His departure will leave a noticeable gap in the world of social satire. It remains to be seen if new host Trevor Noah, or Stephen Colbert’s Late Show, will take up the slack. One thing is obvious, however. Conservatives have no intention (or ability) to offer up any quality humor. Fox News is trying – and failing – with their new Greg Gutfeld program. And this morning on Outnumbered, Fox booked a comedian guest host (Ryan Reiss) who fell flat with this opening gag: “Let’s first address the issue of [Hillary Clinton’s poll] numbers falling. She’s an older candidate so I’m sure she’s familiar with falls. At this point I think we’re gonna have to get her a Life-Alert.” Even the regular all-female panelists on the show greeted that joke with silence or groans. But sadly, that’s all they’ve got. The right is so full of hostility and hatred and prejudice and undeserved superiority that they have no sense of humor whatsoever. Their idea of comedy is a noxious blend of insults and childish chest-thumping.

For some of the real thing, here is Jon Stewart’s response to the scandal of the secret meeting. This should tide you over until Stewart’s control of the planet is complete. While Fox News revealed Stewart’s plot prematurely, they cannot stop his progress to impose his left-wing brand of comedyism on the world.