For months there has been a concerted effort by Fox News to torpedo the presidential campaign of Hillary Clinton. They have done it by relentlessly airing stories about alleged scandals that they have trumpeted with glee would end her White House aspirations. Those stories include everything from Benghazi to the Clinton Foundation, to her aide Huma Abedin’s alleged ties to Muslim extremists, to her private computer server. Never mind that there has never been a smidgen of actual evidence showing that she had engaged in anything unlawful or unethical. Just the wild accusations repeated ad nauseum on Fox News is enough to plant the notion in the mind of the public and drive down her poll numbers for trustworthiness. 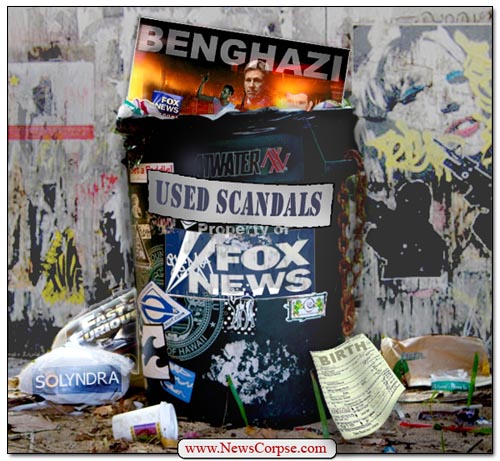 The mission of Fox News is obviously to sabotage the campaign of the strongest Democratic candidate for the 2016 presidential election. They know that Clinton, even after the smear crusade, still manages to out poll every Republican challenger. Consequently, they need to persist in the propaganda blitz until they succeed in bringing her down.

While previous attempts focused heavily on Benghazi, the inability to make their false charges stick has driven Fox to elevate a different scandalette to the forefront. So now Benghazi has been at least temporarily sidelined in favor of the dreaded lost emails. What Fox is trying to turn into a political frenzy is the allegation that Clinton had sent or received classified email communications using a private computer server rather than one hosted by the feds at the Department of State. This, they imply, may have exposed sensitive information to unfriendly nations.

The first point that needs to be made is that recent reports have revealed that hackers have already trespassed into the official government servers that store data for millions of federal employees. However, there is no evidence whatsoever that Clinton’s server security was ever breached by anyone. So Clinton may have actually protected the information she was handling by segregating it on her server while the feds were being hacked. The second pertinent fact is that there is no evidence that any classified emails were sent or received through Clinton’s server.

However, what really makes this media farce so dishonest is that the so-called journalists at Fox News are fabricating a controversy that doesn’t exist in reality. They spend endless hour of valuable airtime yammering about missing emails and mysterious servers. Even though Clinton, in an unprecedented display of transparency, turned over 55,000 pages of emails. This was never done by other Secretaries of State who also used private servers. Nor was it done by her GOP opponents who as governors did the same thing.

To make matters worse, Fox News completely ignores previous incidents when emails went missing. For instance, when the Bush administration was under investigation for various improprieties, they suddenly announced that, not thousands, but millions of emails had mysteriously vanished. This scandal even included allegations that then-White House operative Karl Rove had been communicating with a private server located at the Republican National Committee.

At the time, Bush’s Press Secretary Dana Perino (now a host on Fox News), insisted it was an unfortunate but innocent computer glitch. This is the same Perino who now calls Clinton’s email situation a criminal offense. And at a congressional investigation of the Bush matter, the GOP’s Clinton inquisitionist, Darrell Issa, also tried to dismiss the Bush debacle as a glitch. Furthermore, then-CNN reporter Ed Henry (now also on Fox News) speculated that the Bush affair might be a violation of the Federal Presidential Records Act.

As if that weren’t enough, the Fox News family has another email scandal in its past. When Rupert Murdoch’s British newspapers were caught hacking into the phone and email accounts of private citizens, celebrities, politicians, and royals, they tried to cover it up by making millions of emails disappear. This destruction of evidence was not merely alluded to, but was proven with internal, News Corp. memos describing their policy of destroying emails “that could be unhelpful in the context of future litigation”.

So you have to wonder what moral authority anyone at Fox News has to complain about Clinton’s emails, which have never been proven to contain anything untoward. Clearly Fox isn’t interested in compliance with the law or good government. They are deploying a well-coordinated attack on a political rival whom they desperately fear. And they wonder why no one regards them as a reputable news network.