This evening on Fox News Shannon Bream, filling in for Megyn Kelly, did a segment about how dismal Hillary Clinton’s future is now that her poll numbers have descended to unfathomable depths, particularly with regard to favorability. 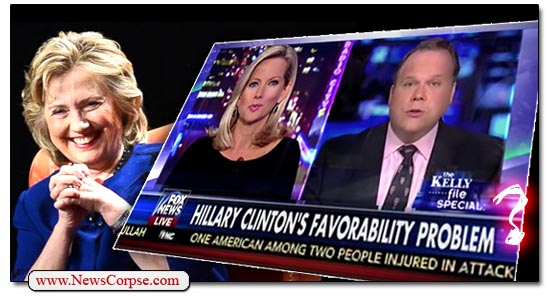 Like much of the rest of Fox’s recent coverage of Clinton, the impression made is that Clinton has about three weeks before she will drop out of the race and report to prison. To open the segment Bream gleefully reported that…

“A new poll now showing Clinton may be more disliked than she has been in decades. As a brand new survey from CNN shows her unfavorability rating is now at a whopping 53%. A number that Clinton has seen just one other time in twenty-three years of polling.”

What the “fair and balanced” propagandists at Fox are leaving out is that Clinton’s favorable rating in the CNN poll that they referenced is better than all of the Republicans that were polled. Clinton scored 44% favorable. That compares to Donald Trump at 36% and Jeb Bush at 34%. What’s more, Clinton’s unfavorable rating is lower than her most likely opponents. She pulled 53% while Trump and Bush were higher at 59% and 56% respectively.

Clinton has had the honor of being ranked as the most admired woman in the world nineteen times in Gallup’s annual survey. She received that honor the last thirteen years in a row. It is not particularly surprising that in an election year where seventeen Republican candidates are bashing her relentlessly her public image might suffer. Add to that the effect of the smear job that Fox engages in every day and it would be a miracle if her numbers didn’t decline a bit.

Notwithstanding those assaults, Clinton is still faring better than her GOP rivals who have had very little mud thrown at them. She is still beating them in head-to-head match-ups. And her support in the Democratic Party is unwavering.

What Fox News is trying to do is project their open disgust for her in the hopes that it will harm her electoral prospects next year. That’s also why they keep promoting Bernie Sanders and Joe Biden. They obviously hate them just as much as they hate her, but for the time being they are happy to use them as wedges to create chaos for the Democrats.

If Clinton’s 53% unfavorable rating can be characterized as “whopping” by Fox News, then what would they call Trump’s 59% or Bush’s 56%? Of course the answer is that they wouldn’t call it anything at all because they wouldn’t devote a segment of a primetime program to their “favorability problems.” In the Fox world everyone loves Republicans and they always will win every election. At least that’s how they present it to their dimwitted audience who are later shocked when they lose.