Republican presidential candidate and loony cartoony narcissist Donald Trump has been dominating the media and the polls for the past three months. The degree of obsession exhibited by the press is unprecedented as they rush to cover every scrap of data related to Trump and broadcast all of his public events live as if they were actually newsworthy. The environment surrounding the GOP campaign has devolved into a freak show featuring overt bigotry and stupefying ignorance. 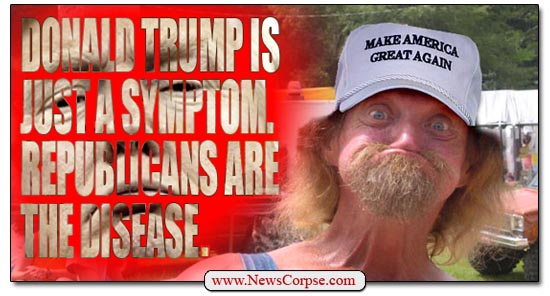 More often than not the blame for this is laid at the feet of Trump, whose own bigotry and ignorance are displayed prominently every time he opens his mouth. But that is somewhat unfair. While Trump is certainly responsible for some of the most memorably ludicrous moments of the campaign, the fact that his hateful idiocy has caught on with a significant faction of the Republican electorate isn’t his fault. Trump’s support isn’t coming from the back seat of his limo. There are actual voters lining up to align themselves with his noxious brand and without them he would be an asterisk in the polls.

A real world illustration of this occurred this week when Trump failed to rebuke a questioner who maligned Muslims and cast doubt on President Obama’s faith and citizenship. The press properly reported Trump’s response, but then portrayed it as if it were peculiar to him. The fact is that a majority of his supporters believe the very same things. That questioner was not an aberration (or a liberal plant as some wingnuts have been alleging). He is a typical representative of Trump’s base and the GOP’s as well.

Trump is not creating the bigotry that is so evident on the right. He is exploiting it, he is benefiting from it and, in the worst instances, he is fanning it. But it was there long before he began his campaign, and it will persist after he inevitably flames out. Whoever the Republican nominee is, he or she will be leading a party that still harbors the prejudices that we are seeing today. If anything, Trump’s campaign is serving a purpose by bringing these views into the light.

However, these tendencies on the part of conservatives are not reserved for the Trump contingent. A new poll by CNN shows that Carly Fiorina has jumped to second place following the CNN debate. What is significant in that is that her boost was the result of her telling the biggest lie of the whole debate. She said that she had seen video showing Planned Parenthood harvesting body parts from an aborted fetus with a beating heart and kicking legs. However, numerous independent journalists who watched all twelve hours of the videos she referenced reported that no such video exists. Nevertheless, her demonstrable lie has thrust her into the upper tier of Republican candidates. This is more proof that the GOP electorate is not only bigoted and ignorant, but they also have no respect for the truth.

There are plenty of other examples of this behavior. Mike Huckebee falsely asserted that Planned Parenthood was caught selling baby body parts for profit. Scott Walker thinks his confrontation with union members in Wisconsin is equivalent to doing battle with ISIS. Ben Carson just today said that he doesn’t believe that Muslims should ever be considered for president. Jeb Bush actually said that using big words makes the world more dangerous.

Ignorance and bigotry? They are the indicators of a Republican Party deeply infected with a disease that is making the nation sick. The Republican candidates are simply the opportunistic symptoms taking advantage of a weakened immune system. So the next time you see Trump, or any other GOP nut case, say something stupid or offensive, remember that they are saying it to fellow Republicans who feel exactly the same way.

23 thoughts on “Donald Trump Is Just A Symptom. Republicans Are The Disease”