With the methodical precision of the German train schedule, Fox News has come out with their regular feature arguing that the fewer people who participate in America’s democracy the better. They seem to trot out this theory before every election, along with efforts to slash democrats from the voter rolls, in an obvious attempt to exclude those they regard as unfit to vote. This year’s version features right-wing economist, and frequent Fox News guest, Thomas Sowell. 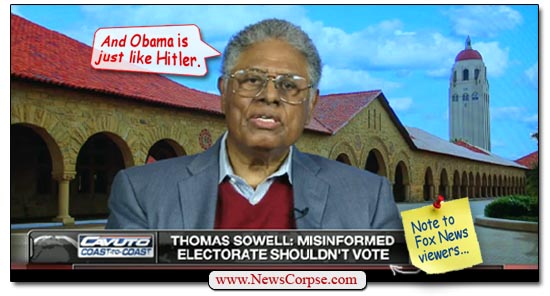 Appearing on Neil Cavuto’s program on the Fox Business Network (video below), Sowell elaborated on an article he published that made the case for shrinking the electorate so that only the “right” people voted. In response to Cavuto’s brazenly leading question, with the premise that voting “is not necessarily a birthright,” Sowell said that…

“Elections are not held just for social participation. They’re not held just to vet our emotions. They’re held to elect people who will hold our lives and the lives of our loved ones in their hands, as well as the fate of the entire nation. To go out as if we’re voting for homecoming queen is madness. I advise in that column that people who really haven’t had a chance to study these things and know much about it, their most patriotic act would be to stay home on election day, rather than vote on the basis of their whims or their emotions, which is really playing Russian roulette with the history of the country.”

The arrogance of Sowell’s perspective is both wrong and dangerous for two reasons. First, he fails to define what he regards as “whims” and “emotions.” It would be way too easy to label anyone who disagrees with him as emotional and, therefore, unfit to cast a vote. What’s more, emotions have always been a part of the democratic process and should continue to be considered by a compassionate electorate. And secondly, Sowell’s advice that allegedly uninformed or misinformed voters stay home is more of an avoidance of the problem than a solution. How about educating the voters so they can make informed decisions? Apparently Sowell and Cavuto would prefer to just exclude them.

After hearing Sowell’s theory that misinformed citizens should abstain from voting, Cavuto offered a typically snarky response saying that “By that measure I think it’s safe to say that every MSNBC viewer should just stay home.” Very funny, Neil. But actually Cavuto has a point, just the wrong one (as usual). If anyone should refrain from voting based on the cable news network they watch it should be Fox News viewers. Numerous studies have shown that Fox viewers are consistently the most uninformed. Even among Republicans, the ones who watch Fox have the worst grasp of reality.

The political bias in Sowell’s article was starkly evident in his deranged assertion that Obama is the same sort of “glib egomaniac” as Donald Trump. He provided no examples to support that absurd claim. Certainly Obama has never engaged in ludicrous boasts about how he is the greatest, smartest, bestest at anything and everything the way Trump does. But where Sowell goes completely off the rails is when he makes this disgusting comparison between Obama and Hitler:

“No national leader ever aroused more fervent emotions than Adolf Hitler did in the 1930s. Watch some old newsreels of German crowds delirious with joy at the sight of him. The only things at all comparable in more recent times were the ecstatic crowds that greeted Barack Obama when he burst upon the political scene in 2008.”

See? Obama is just like Hitler, according to Sowell. And all because he attracted large crowds. You know who else attracts large crowds? Donald Trump. The difference is that Obama’s crowds represented the diversity of America and never devolved into insults and hostility. Trump’s crowds, on the other hand, are predominantly white and they are openly hostile to Latinos, Muslims, and gays. So which crowd is more like the Nazis? And which party, with it’s demagogic appeals to American Exceptionalism (aka American Supremacy), is more aligned with Hitler’s mission? I’m just sayin’…

4 thoughts on “On Fox News: Misinformed People Should Not Vote – And Obama Is Just Like Hitler”