Just in time for Halloween, President Obama has revealed the costume that Fox News made to heighten the fears of their perpetually skittish viewers. It’s something they have been dressing up the President in for the past seven years, but it doesn’t get much attention from the President himself. 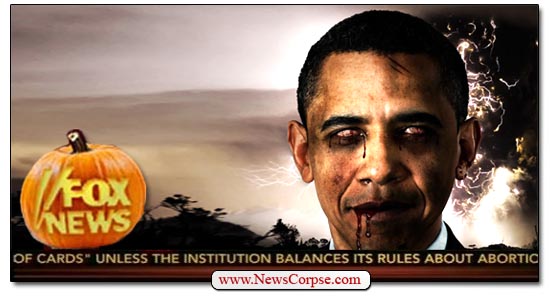 In an interview with author Marilynne Robinson, the discussion turned to the values that are found in the diversity of American life. This led the President to recall his experiences in small-town America when he first began campaigning for the White House.

“It’s interesting, because we’re talking in Iowa; people always, I think, were surprised about me connecting with folks in small-town Iowa. And the reason I did was, first of all, I had the benefit that at the time nobody expected me to win. And so I wasn’t viewed through this prism of Fox News and conservative media, and making me scary.“

Indeed, Fox News has since toiled feverishly to turn Obama into a fearsome entity bent on the destruction of mankind. They have literally accused him of conspiring with our mortal enemies; of plotting to murder millions of Americans; of surrendering our liberty and land to foreign tyrants; and even taunting God so as to bring about the End Times. It’s a nightmarish vision that was constructed from nothing but their seething hatred for a dark-skinned stranger who they believed had no right to rise to leadership and reside in the White House.

For his part, Obama has been aware of the animosity that consumed his ideological foes. There was, however, little he could do about it. The more he would try, the more they interpreted it as an insidious ploy to enslave them with charm. Witness this hideously secret assault as described by Obama to Robinson:

“And the thing I’ve been struggling with throughout my political career is how do you close the gap. There’s all this goodness and decency and common sense on the ground, and somehow it gets translated into rigid, dogmatic, often mean-spirited politics. And some of it has to do with all the filters that stand between ordinary people who are busy and running around trying to look after their kids and do a good job and do all the things that maintain a community, so they don’t have the chance to follow the details of complicated policy debates.”

What a monster! How dare he try to find common ground in a democratic society while partisans in the press and politics are stirring up irrational dissent. And why does he want to close The Gap? Is he biased in favor of Urban Outfitters? Or is he just fundamentally opposed to the free market?

Later in the interview, Obama pinpoints one of the potential causes of the adversarial nature of our country. He describes it as the natural tendency of Americans to mistrust governments, which he says is “in our DNA.”

“We’re suspicious of government as a tool of oppression. And that skepticism is healthy, but it can also be paralyzing when we’re trying to do big things together.”

That’s true. And it certainly doesn’t help when you have giant media networks deliberately fomenting fear and ignorance and using the naivete of their audience to build opposition based on lies. In fact, all it does is pave the way for cartoonish demagogues like Donald Trump, and leave Grand Old Parties struggling to find anyone who actually wants to lead their parade of clowns.

3 thoughts on “Obama Mocks Fox News For ‘Making Me Scary’”