The volume of excrement spewing from the mouth of Donald Trump continues to increase by the day. The latest eruption comes from a speech he gave in Davenport, Iowa, where he made baseless accusations against Saira Khan, the sister of terrorist gunman Syed Farook. 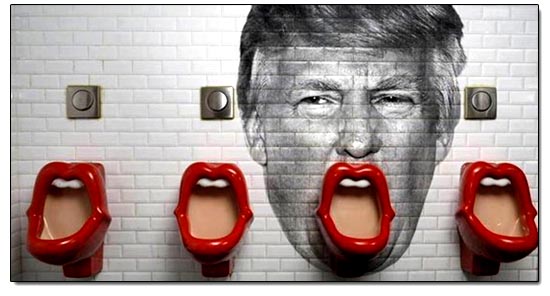 In an interview (video below) with NBC’s Chris Jansing, Khan revealed that she, and other members of her family, were shocked by her brother’s involvement in the attack. She was clearly distraught and described it as a nightmare. But when Trump watched the interview he saw more than the average mortal would be able to see.

Trump: I watched the sister of the guy last night on television, right, and I’m pretty good at this stuff, and I watched her, she had the veil, the whole thing, she’s talking about the brother. […] I thought she was lying so much. I’m good at this. I thought she was a total liar. I watched her being interviewed last night, right? She lied about him. She didn’t know he felt this way? She knew. And a lot of other people knew, too.

So The Donald is “good at this stuff?” What is he talking about? Reading people’s minds? What he’s good at is libeling people without a speck of evidence. For him to say flatly that “she knew” is a malicious assertion that could result in serious harm physically, emotionally, and to her reputation. Trump is effectively saying that she is an accomplice to terrorism. And for a pathological liar like Trump to impugn the honesty of anyone else is just ludicrous.

A couple of years ago Glenn Beck similarly implied that an innocent person was involved in the Boston marathon bombing. Beck is now being sued for his reckless and bigoted comments. And the same thing should happen to Trump. However, this defamation fits nicely with Trump’s prior remarks last week wherein he said that family members should be targeted in military strikes, which would constitute war crimes.

This focus on the family is a rapidly developing pattern for Trump. With today’s libel against Ms Khan, and last week’s advocacy of war crimes, Trump is showing that he has no regard for innocent human life. It’s a position he comes to through his innate racism and a desire exploit the fear of his paranoid followers. Even worse, it is steeped in the sort of unmitigated ignorance and delusion that produced his fantastical claim that “thousands and thousands” of Muslims in New Jersey were celebrating the fall of the World Trade Center buildings.

Trump’s disturbing assault on family members, whose beliefs he can’t possibly know, took another turn toward the nauseating hate-mongering that has become the trademark of his campaign. On CBS’ Face the Nation this morning he whipped up another slap at families and simultaneously added another bald-faced lie to the Trump Bullshitopedia:

Trump: [The 9/11 hijackers] put their families on airplanes, couple of days before, sent them back to Saudi Arabia for the most part. Those wives knew exactly what was going to happen.

There’s just one small problem with that wild assertion. Only one of the nineteen hijackers was married. No doubt Trump saw “thousands and thousands” of terrorist housewives boarding planes on September 9th, taking with them their knowledge of Bin Laden’s plans. And if anyone disputes his claims he will back them up with hundreds of his twitter followers who also saw the phantom planes. Mass dementia is working well for Trump. It’s probably something he learned from Fox News.

4 thoughts on “Pathological Liar Donald Trump Is Calling Other People Liars Which, Of Course, Is A Lie”