The seething hatred of President Obama by Fox News came gushing out this morning by one of the network’s most notorious hatchet men. Lt. Col Ralph Peters (whose name translates to “vomiting penises” in Slanglish) appeared on Stuart Varney’s Fox Business program to discuss/bash Obama’s Oval Office speech on terrorism last night. 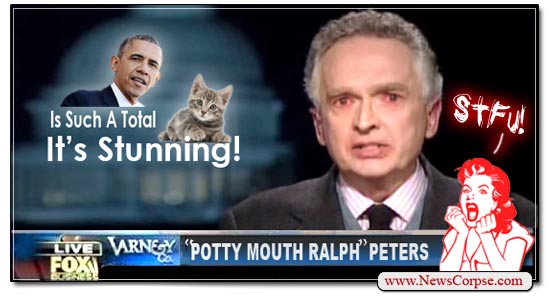 Peters was virtually spitting teeth (video below) as he was unable to control his most primitive tendencies. In an otherwise mundane response to Varney’s inquiry as to “What was your commentary as the President’s speech unfolded?” Peters launched into a profane rant that barely addressed anything about the speech itself.

Peters: Well, first of all, he keeps speaking about “We can’t give in to our fears. Don’t be afraid.” Look Mr. President, we’re not afraid. [shouting] We’re angry. We’re pissed off. We’re furious. We want you to react. We want you to do something. You’re afraid. I mean this guy is such a total pussy it’s stunning.

Really? The President who presided over the capture and execution of Osama Bin Laden; who as Commander-in-Chief as ordered more than 8,000 airstrikes against ISIS; whose military missions have dropped more than 20,000 bombs on enemy targets; who has killed thousands of ISIS fighters, including many of its leaders; this president is a pussy? What Peters, and every right-winger, are too ignorant to acknowledge is that Obama has been executing a plan that has had much success. Yet his critics keep blathering about irrelevancies. Is it because he refuses to send more Americans onto a battlefield where they would become sitting ducks for a guerrilla insurgency? Or because he expects the people of the region to take responsibility for the ground war against an enemy that is murdering them?

Peters goes on to lambaste Obama in the fashion that birthers have long used to “otherize” him as an alien creature saying that “The American people, whom he does not know in any sort of intimate manner,” want action. He then rattles off s a series of assertions that the President cares more about our enemies than ourselves. Eventually, Varney steps in to daintily scold Peters for his potty mouth.

Varney: I can tell you are super-angry, and I asked you what your reaction was, but I gotta call you, you can’t use language like that on the program. OK. I’m Sorry.

He’s sorry? What for? Peters comes completely unglued with an offensive rant and Varney apologizes for chastising him, while excusing the outburst due to Peters’ anger. What makes this even more ridiculous is that Varney allows Peters to continue for a bit and then…

Varney: Ralph, I’m sorry. I’ve got to interrupt again. You used some very strong language there about the President of the United States, and I’m the anchor of Varney & Co. and I have to ask you, either you should apologize for that or take it back.

Peters chose only to apologize. But you have to wonder what happened in between Varney’s first redress of the foul language and his subsequent request for an apology. It seems likely that someone in the control room pulling Varney’s strings gave him a directive to force a more formal atonement. While Fox’s audience likely shares Peters’ crude disgust for all things Obama, the network may have to tread lightly so as not to offend their glassy-eyed, Christianist viewers.

For the record, Peters has proven to be one of the most repugnant individuals to ever appear on Fox News (and that’s saying something). The Ralph Peters Story is one of truly nauseating notions that include: advocating military strikes on the American media; that there aren’t enough civilian casualties in war; that the U.S. should be more like ISIS; that the Taliban should have been allowed to execute an American soldier; and many more horrendous pronouncements. Consequently, this frothing tirade is not particularly surprising. And it is typical of the irrational loathing that is broadcast on Fox News every day.

[Update:] Fox News has issued a press release stating that Ralph Peters has been suspended for two weeks due to his “inappropriate and unacceptable” comments. Fox also suspended contributor and fill-in cohost on Outnumbered, Stacey Dash, for saying that the President “doesn’t give a shit” about terrorism. It should be noted that these two contributors are often not on the air for two weeks or more, so this “punishment” is purely symbolic.

Also notable is that Fox has not reported the news of these suspensions and they have not posted video of Peters’ appearance on Varney & Co. It’s too bad that Fox will punish people for bad language, but not for bad information. Let’s see if they suspend Donald Trump who has been saying “bullshit” and “chickenshit” in his stump speeches lately.