On a day that has seen two Fox News loudmouths suspended for using profanity on the air, and the leading Republican presidential candidate (yep, Donald Trump) propose banning all Muslims from entering the United States (an idea so repulsive that Dick Cheney (!) said it “goes against everything we stand for and believe in”), there is still another lowlife wingnut competing for recognition as asshole of the day. 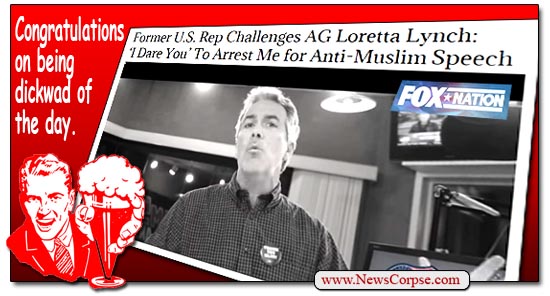 Former Illinois representative Joe Walsh (R-Loon) is a world-class nutcase who has called for beheading members of the media. He posted a video on his Facebook page (see below) to express his dismay over something he thought he heard Attorney General Loretta Lynch say. The resulting tirade was a spectacularly deranged descent into rank Islamophobia. So obviously Fox News featured it on their community website, Fox Nation, so as to spread the hate to the biggest audience possible.

Walsh: You got a problem Loretta Lynch? Well this is for you and everybody else in this country who is trying to shut me up.

[This paranoid douchebag seriously believes that scads of people are trying to shut him up, when there probably aren’t a dozen who even know that he’s talking]

Walsh: You come out today and you say you’re going to prosecute Americans who use anti Muslim speech? That doesn’t happen in this country. I can say whatever I want about Christians, Jews or Muslims.

[Actually, Lynch never said anything like that. More on that point later]

Walsh: I think Islam has a real freaking problem, alright? There is a cancer in Islam, and if they’re not going to learn to assimilate, I don’t want them in this country. You got a problem, Loretta Lynch, with me saying that? Then throw me in jail. […] Well you know what? I hope that there is a backlash. There should be a backlash. I’m going to encourage a backlash. And do you know what Loretta Lynch? If that bothers you, prosecute me.

[And not only is Walsh paranoid and delusional, he’s bitterly racist. And he is not shy about advocating violence]

Now let’s take a look at what Lynch actually said:

Lynch: When we talk about the First Amendment we [must] make it clear that actions predicated on violent talk are not American. They are not who we are, they are not what we do, and they will be prosecuted. My message not just to the Muslim community but to all Americans is: we cannot give in to the fear that these backlashes are really based on.

Notice that Walsh is trembling with anger at the thought that his God given right to hurl noxious insults at Muslims who have never harmed him might be infringed upon by the chief law enforcement officer of the land. He is absolutely furious that she would suggest something so un-American.

The only problem with Walsh’s bitchfest is that Lynch didn’t suggest anything of the kind. What she said plainly referred to “actions” not words. And in America, if you engage in violent actions that were incited by the sort of crackpot rhetoric that Walsh is dishing out, you can and will be prosecuted. It is also possible to be prosecuted if speech is deemed to have incited violence, but there has to an imminent threat and a direct causal association and intention. That’s much harder to prove.

So Walsh’s howling harangue was a big waste of time and energy wherein he completely misunderstood what Lynch said. It accomplished nothing other than to reveal what an ignorant, racist dickwad he is. It’s also an ideal illustration of what President Obama was warning against in his speech last when he said…

“We cannot turn against one another by letting this fight be defined as a war between America and Islam. That, too, is what groups like ISIL want. ISIL does not speak for Islam. They are thugs and killers, part of a cult of death […] the vast majority of terrorist victims around the world are Muslim. If we’re to succeed in defeating terrorism we must enlist Muslim communities as some of our strongest allies, rather than push them away through suspicion and hate.”